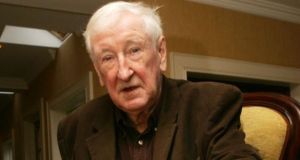 The poet John Montague who has died in France. Photograph: Cyril Byrne 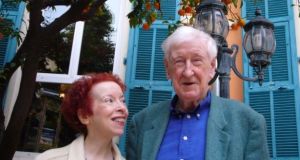 The remains of the Irish poet John Montague, who died in Nice early on Saturday, will be flown from Nice to Dublin in the coming days , his widow and daughters have said.

“There will be a funeral service in Newman University Church on Stephen’s Green, which John loved, for family and friends, followed by a private interment for the family in the cemetery in Garvaghey – a final homecoming,” his widow Elizabeth Wassell said.

Montague, who was 87, had undergone elective surgery for a knotted colon at the Clinique du Parc Impérial in Nice. He was put on life support on December 9th, after developing a fever. His daughters Oonagh and Sibyl Montague travelled to Nice from Cork and Dublin respectively.

“On Thursday night we were sitting so closely. We were both lonely when we were apart,” Ms Wassell said through tears. “I suggested to John that it was a second courtship for us. He smiled warmly. We loved each other so ferociously. He was the love of my life.”

In 2010, he was made a Chevalier de la Legion d’honneur, France’s highest civil award. Three weeks before his death, he received a Lifetime Achievement Award at the Bord Gáis Energy Irish Book Awards in Dublin.

John Montague was born in Brooklyn on February 28th, 1929. When he was four, his mother fell ill and he and brothers Seamus and Turlough were sent to be raised by relatives in Northern Ireland. The boys were separated, and John was cared for by spinster aunts in Garvaghey, a townland between Ballygawley and Omagh.

Garvaghey means ‘The Rough Field,’ the title of Montague’s 1972 volume of poems about Northern Ireland. Ms Wassell described it as a book “about anguish and rage and a sundered province” that “made the establishment uncomfortable”.

In Ireland, France and the US, Montague forged literary friendships. As a visiting professor at the University of California, Berkeley, he rubbed shoulders with the Beat Generation poets.

In Paris, he became a drinking buddy of Samuel Beckett. He called the reclusive Beckett “the Greta Garbo of modern literature”.

“He taught at University College Cork, from 1973 until the late 1980s,” the poet Theo Dorgan, who is organising the funeral service in Dublin, recalled. “John and [his second wife] Evelyn were immensely hospitable. He was a catalysing presence. He educated a whole generation of Munster poets. We taught ourselves through his extraordinary library of contemporary American poetry.”

Montague’s first wife, Madeleine Mottuel, still lives in the apartment they inhabited in the rue Daguerre, Montparnasse. “He was just a country boy. Madeleine put manners on him,” Oonagh Montague said.

Montague’s marriage to Evelyn Robson Montague lasted 25 year, and produced daughters Oonagh and Sibyl, and grandchildren Eve and Theo. Though Evelyn is French, she has remained in Cork.

“For 25 years in Cork, they had a very open home that many poets and artists visited,” Oonagh Montague said. “I grew up hearing amazing dinner conversation, poetry readings and music. Mum would put together incredible meals. It was the place where Dad produced some of his most memorable work.”

Montague met Elizabeth Wassell, an American novelist, when she served wine at one of his poetry readings in lower Manhattan in 1992. “I will be your Ganymede,” she told him. They became inseparable and were a striking couple as they walked around their immigrant neighbourhood in Nice: John tall, white-haired and twinkly-eyed; Elizabeth with her high forehead and flaming red hair.

Since 1998, Montague and Wassell divided their time between their farmhouse in west Cork and a garret apartment near the train station in Nice. They married at the town hall in Nice in 2005.

“Elizabeth was there for him no matter what, and dedicated herself to him totally. Each wife brought something to him,” Oonagh Montague said. “Without Madeleine, Evelyn and Elizabeth, Dad would not have become what he did.”

Montague produced his late period poems in Nice. His last volume of poetry, Second Childhood, will be published by Gallery Press next February.

Montague freelanced for The Irish Times in Paris in the 1960s. With typical humour, he referred to Gen Charles de Gaulle as “the great giraffe”. He often spoke of similarities between the French colonisation of Algeria and the British in Northern Ireland.

Montague occasionally returned to journalism. In 2000, he wrote an extensive, investigative report for the New Yorker magazine titled “A Devil in the Hills,” about the murder of Sophie Toscan du Plantier.

Montague and Wassell were heading to the Promenade des Anglais to watch the fireworks last July 14th when they turned back, deterred by what Wassell called a “méchant wind”. Had they not gone home, they might have been caught in the rampage by a Tunisian lorry driver that killed 86 people.

When I saw Montague and Wassell four days later, they were devastated by what had happened to their beloved Nice. Montague feared civil strife between Muslims and secular French. He walked more slowly, and his voice had faded to a whisper, but his mind was sharp.

In a March 2014 interview, I had asked Montague the question he put to Beckett at their last meeting: “Was there much of the journey you found worthwhile?”

“There was a great deal of it I enjoyed . . . Obviously, love has meant a great deal to me . . . I seem to have got rid of jealousy,” Montague said, alluding to what he called “sibling rivalry perhaps” with Seamus Heaney. But he spoke fondly of Heaney, quoted his poetry and was in contact with Heaney’s widow Marie.

Montague said he “would have liked it to be a bit easier”, but concluded, “I’ve had a full life.”