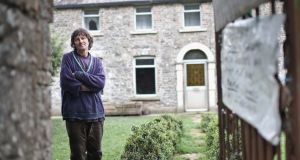 Thomas Reid of Blakestown, Maynooth, Co Kildare, whose family had farmed the surrounding land for more than a century. Photograph: Feargal Ward

A few years ago on a rural back road in Co Kildare, the owner of a stone cottage draped black and white hand-painted signs over his gates. They signalled a war footing, a siege mentality.

Thomas Reid, whose family had farmed the surrounding land for more than a century, now found himself in the sights of the Industrial Development Authority (IDA), attempting to acquire his land by compulsory purchase order (CPO) for some non-specific use.

From the outset, Reid’s position was clear – at least to him: it was not for sale. The writing on his handmade signs sought to inform anyone who would listen of the battle he faced.

One of those people was Feargal Ward, a documentary film maker who often drove by Reid’s farmstead and noticed the scrawling appeals for attention.

“I stopped one day to see what was written on the signs,” he says. “It was a bit of a call out to the community so they knew what was happening to him.”

As time went on, Ward found himself “just calling up and getting to know him as a person over months and months. And then it was [about] trying to understand him and the story.”

That story – the coveted David and Goliath, rural versus modernity – is now the focus of a feature length documentary, The Lonely Battle of Thomas Reid, which will have its Irish premiere at the Dublin International Film Festival later this month.

It is a dramatic meditation on the years of legal to-and-fro that dogged Reid’s otherwise straightforward life. It depicts an unbendable will that eventually leads to a Supreme Court ruling defending his right to property and overturning the IDA’s ability to force its sale.

As it happens, the film’s Irish release coincides with a Bill being brought by the Department of Enterprise to address the issues raised in the Supreme Court ruling and, the department explains, to “ensure that the IDA has the legal basis to continue to acquire property in pursuit of its industrial development functions”.

Where the IDA represents the importance of foreign direct investment and employment to the Irish economy, Reid personifies that most Irish of themes: the nation’s intractable attachment to the land.

His family’s enduring ties to the Kildare homestead is at one point captured in an old black and white photograph of his aunt Nancy, who died of tuberculosis

His battle not to concede his 72-acres at Hedsor House in Blakestown, which adjoin the Carton House Estate and Intel site in Leixlip, was protracted.

In 2013 the High Court swatted aside his claims that the IDA’s decision to CPO his farm, as provided for in the 1986 Industrial Development Act, was flawed and a breach of both his property rights and the Constitution and European Convention of Human Rights.

Mr Justice John Hedigan dismissed his case on the grounds that the proposed compulsory purchase was provided for by law. He said it was clearly intended to achieve the IDA’s objective of encouraging industrial development. Staring headlong toward defeat, Reid appealed to the Supreme Court.

The documentary sets Reid’s life against the juggernaut of industrial development interests. He is filmed in his livingroom surrounded by piles of papers, video tapes of Dallas episodes, fire wood and food packaging.

He eats and listens to the radio in between working his land. His family’s enduring ties to the Kildare homestead is at one point captured in an old black and white photograph of his aunt Nancy, who died of tuberculosis.

Played by actors, IDA officials who arrive at Reid’s property, as they had done in real life, impress upon him the importance of his property to Ireland’s needs.

FDI companies create much needed employment but their ability to do so “totally depends on us being able to get appropriate lands” they tell him.

After his failed High Court action, and the looming prospect of being forced from his home, a forlorn Reid asks: “Why did these f***ers ever start at all on me?”

Then in 2015, things finally turned his way. A unanimous Supreme Court ruling overturned that of the High Court. It found the making of the CPO had been in excess of the IDA’s powers. Reid, after three years of dispute, had won.

The film’s final scenes capture Reid leaving the Supreme Court on the day of the ruling. Though visibly pleased by the outcome and the media attention, he is scathing of the system that put him there in the first place.

“It is a good day for Ireland, ” he tells the press, before making his way back to rural Kildare.