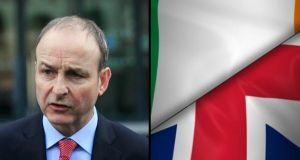 Fianna Fáil leader Micheál Martin says he believes a united Ireland is possible in his lifetime.

Fianna Fáil is to publish a 12-point plan within months to strengthen economic, political and educational links between the Republic and Northern Ireland, which could help prepare the way for unification of the island.

Party leader Micheál Martin says he believes Irish unity is possible in his lifetime but that serious work needs to be done to prepare for such a prospect.

In an interview with The Irish Times, Mr Martin outlined the details of a white paper on reunification he will publish in the coming months.

These include maintaining the Stormont Assembly and possibly the Executive after a future reunification referendum, as well as a deal between the British and Irish governments that would see London continue to pay the block grant to Northern Ireland on a declining basis over a number of years.

He said Brexit could serve to drive North and South further apart or could bring Irish unity closer together, if the economic consequences caused difficulty in Northern Ireland.

Under his approach, a reunified Ireland would operate along similar lines to the current settlement, but with the roles of London and Dublin reversed. The “three-strand” process of the Belfast Agreement – with its emphasis on the east-west, North-South and cross-community relationships – would continue.

Mr Martin maintains, however, that substantial work needs to be done in advance of any referendum to strengthen ties between Northern Ireland and the Republic.

He will outline 12 “building blocks” or “concrete proposals” that “would substantially develop the cross-Border, North-South dimension”.

These include a common enterprise agency that would attract foreign direct investment to the island as a whole, rather than having competing organisations, which could in turn lead to harmonised taxes for businesses; moves towards a common education curriculum for schools, starting with history and English before moving to other subjects; common food safety and standards; common recognition of educational qualifications, such as the Leaving Certificate; and continued access to European research programmes for third-level institutions across Ireland after Brexit.

A cross-Border “development zone” that takes in Northern Ireland and the Border region is also proposed, which he says takes on a particular importance following the British decision to withdraw from the EU.

An independent assessment of the value of the block grant, which the British government says will be €12.5 billon by 2020, would be commissioned.

Mr Martin said that “ways and means” of the cost of reunification would be dealt with in the white paper.

Mr Martin said Irish unity was possible within his lifetime but insisted it would not happen overnight with “premature Border polls”, as advocated by Sinn Féin.