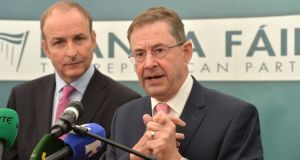 The proposed commemoration of the Royal Irish Constabulary (RIC) and the Dublin Metropolitan Police (DMP) will not go ahead as planned if Fianna Fáil forms the next government, Eamon Ó Cuív has said.

Mr Ó Cuív, a member of the all-party advisory committee on commemorations, said the party would not countenance a standalone ceremony as envisaged by Minister for Justice Charlie Flanagan.

After postponing the event, Mr Flanagan said he hoped it will be rescheduled this year.

In response Mr Ó Cuív suggested that something more on the lines of an academic conference as proposed by UCD professor of history Diarmaid Ferriter would be appropriate for remembering the two police forces.

The Oireachtas all-party advisory committee on commemorations is due to meet next Wednesday to discuss the fallout from the postponement of the proposed event at Dublin Castle on January 17th.

Mr Ó Cuív said he wanted it recorded in the minutes of the committee that reservations he and other members had about a commemoration for the RIC/DMP were first raised last April.

Mr Ó Cuív, a grandson of Eamon de Valera, said no more State commemorations should be planned until there was a “wide consensus on what is the best way to go forward”.

The Government’s advisory group on commemorations, comprising some of the country’s expert historians, said “consideration should be given to the organisation of specific initiatives to commemorate” the RIC and DMP.

Mr Flanagan said he was following the instructions of the group in hosting a commemoration but Prof Ferriter said the proposal for a commemoration did not envisage a State ceremony.

The group’s chairman Dr Maurice Manning said the advice it gave could be interpreted as including a State ceremony, while another member of the advisory body, who did not wished to be named, said it was partially to blame for giving “opaque advice”.

A commemoration for some RIC men will go ahead at 11am on January 17th – the same hour as the now postponed service was due to be held.

It will be hosted by Comóradh na nÓglach (friends of the volunteers) to honour Sgt Cornelius O’Sullivan at Annacarthy Barracks who supplied information to the Third Tipperary Brigade of the IRA which carried out the Soloheadbeg ambush. He disappeared during the war and his body was never found.

Organiser Aedín Hassett said it had been a mistake to commemorate the RIC as an organisation but “we need to recognise there were good Irish men in the RIC who were as republican as Dan Breen”.