Fianna Fáil: Money in budget for no-deal Brexit should go to businesses

Many Fine Gael sources claim that election preparation is intensifying, but are reluctant to spell out its nature 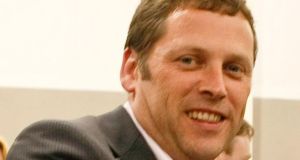 Barry Cowen: he says the revised deal negotiated by Boris Johnson paves the way for a much harder Brexit than envisaged by his predecessor Theresa May

Money set aside to deal with the consequences of a no-deal Brexit should be used to help businesses even if the UK leaves the EU with an agreement as access to the British market will be damaged, Fianna Fáil has said.

Minister for Finance Paschal Donohoe outlined a €1.2 billion fund to help the State deal with the UK’s departure from the bloc in his budget this month. More than half of this – €650 million – would be borrowed in the event of a no-deal Brexit.

Barry Cowen, the Fianna Fáil public expenditure spokesman who helped negotiate the budget, said elements of the Brexit package should be retained.

The revised deal negotiated by prime minister Boris Johnson paves the way for a much harder Brexit than envisaged by his predecessor Theresa May, and Mr Cowen said trade flows between Ireland and the UK would be damaged even further.

“May’s deal was for a soft Brexit with the UK being close to the EU on both customs and regulation – that’s why the Brexiteers hated it,” he said. “Johnson’s Brexit is a hard Brexit in that Britain will leave both the customs union and single market at the end of the transition period and trade on the basis of a free trade agreement.”

He said this meant that Irish exporters would face a significant long-term hit even if nothing goes wrong in free trade negotiations. “Government can’t necessarily immediately pull the shutters down on the package on budget day just because the UK could leave with a deal.”

Taoiseach Leo Varadkar on Sunday said the risk of a no-deal Brexit was now “relatively low”, but that added that the Government would continue to “prepare for it”. He believed it was “more likely than unlikely” that the House of Commons would pass a Brexit deal.

Labour leader Brendan Howlin said the no-deal budget announced by Mr Donohoe, which did not contain tax cuts or significant welfare increases, must be revisited if the UK leaves with a deal.

Fianna Fáil leader Micheál Martin said the consent mechanisms for Northern Ireland in the revised Brexit deal, which would see the Stormont Assembly chose to remain in the new arrangements for the North, “embeds uncertainty into Northern Ireland’s future”. He also claimed Fine Gael figures were agitating for an election.

Mr Varadkar has said he wants a general election to take place in May. However, numerous Fine Gael sources claim that election preparation is intensifying, but are reluctant to spell out exactly how this is being done.

Some of the candidates for the four by-election campaigns – they are due to be held by the end of November in Dublin Fingal, Dublin Mid West, Cork North Central and Wexford – were due to attend a promotional photography and video session with Mr Varadkar on Tuesday but have been stood down.

Sources said the sessions were to prepare promotional material for the by election campaigns, and suggested that general election preparations could now be taking precedence.

However, those close to the Taoiseach said it was not unusual for events with Mr Varadkar to be cancelled or postponed given his busy schedule.