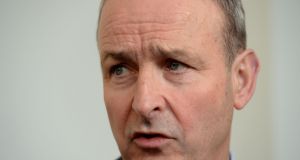 Micheál Martin faced a stormy meeting of the Fianna Fáil parliamentary party on Thursday, with calls for him to open government discussions with Sinn Féin rather than just talking to Fine Gael and others. Photograph: Alan Betson/The Irish Times

A new grassroots group in Fianna Fáil has organised to oppose moves to form a coalition between the party and Fine Gael.

The group – calling itself Grassroots Voices or Cosmhuinter – has begun circulating letters to others in the party, including TDs, outlining its “serious concerns for the party that we all support, love and work for”.

It is asking TDs to raise its concerns at parliamentary party meetings. A letter was sent to TDs on Thursday afternoon, hours after Fianna Fáil leader Micheál Martin told RTÉ’s Sean O’Rourke he would enter coalition with Fine Gael and left open the prospect of rotating the position of taoiseach.

Mr Martin faced a stormy meeting of the Fianna Fáil parliamentary party on Thursday, with calls for him to open government discussions with Sinn Féin rather than just talking to Fine Gael and others. Mr Martin, however, will not change his position, senior party figures said.

Any programme for government that is negotiated must be put to a special ard fheis of Fianna Fáil members to be ratified.

The Fianna Fáil grassroots letter said the group was formed from “intense and honourable” online discussion in the aftermath of the General Election.

“The likelihood of a coalition with Fine Gael became a focus of quite intense debate and has incensed many members of the party who have been loyal and committed Fianna Fáil activists,” it said.

“As a party, we have been severely damaged by several years of sacrificing our party’s ideals in the interests of ‘confidence and supply’ and the honourable attempt to act ‘in the best interests of the people of Ireland’.

“For this, we have seen little or no gratitude from Fine Gael who have, even during those four years, frequently mocked and vilified us.

“We, as a group, are vehemently opposed to any alignment with Fine Gael. We have suffered enough and we cannot stand idly by without voicing our deepest opposition to any alliance with those who could never wish to share our Fianna Fáil values.”

It added that it is “foolhardy” to think voters may “turn back” to Fianna Fáil after a term in office with Fine Gael. Such a government, it said, “ would ultimately hasten the unthinkable and sad demise of our once great, Republican party”.

“We appeal to members of the parliamentary party not to enter a coalition with Fine Gael and, instead, pursue a huge drive to revitalise the party. It is time to say ‘Stop’ and arrest our dwindling fortunes and, as a matter of urgency, seek a unique identity for Fianna Fáil on the Irish political landscape – an identity that was forged in 1926 and has been allowed to slip almost into oblivion in the recent history of the party.

“If Ireland loses Fianna Fáil, it will lose a very precious entity, despite its faults and failings. The richness of its foundation and its profound identity far outweighs its failings. Yet, making the journey to undo those failings is hugely important, not just for FF itself but for Ireland.”