Éamon Ó Cuív, who also took part in event, says he has not been contacted about matter 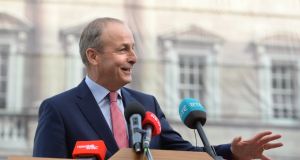 Fianna Fáil leader Micheál Martin has moved to discipline a party figure who participated in what appeared to be the launch of a candidate in Northern Ireland last month.

Senator Mark Daly, from Co Kerry, was removed from his position as the party’s Seanad deputy leader and foreign affairs spokesman.

In a statement, Mr Daly said he accepted Mr Martin’s decision and “will continue to work hard on behalf of my constituents”.

Fianna Fáil later said Senator Lorraine Clifford Lee would take up the role of deputy leader in the Seanad, and that Senator Ned O’Sullivan would take responsibility for foreign affairs, the Irish overseas and diaspora.

Galway West TD Éamon Ó Cuív also took part in the controversial candidate launch, but said he had not been contacted by senior party figures about the matter. He is currently Fianna Fáil front-bench spokesman on rural affairs.

Numerous Fianna Fáil TDs suggested that Mr Martin may have been afraid to reprimand Mr Ó Cuív because of his senior position and standing within the party. There were calls from some in the party earlier this year to allow him to run for the presidency despite Mr Martin publically endorsing Michael D Higgins.

Mr Ó Cuív and Mr Daly attended the election launch of councillor Sorcha McAnespy, who is an independent councillor on Fermanagh and Omagh District Council a number of weeks ago.

She was unveiled as Fianna Fáil candidate for the Northern Ireland local elections at the event, but party headquarters later insisted no decision had been taken on “whether or not it will contest elections in the North”.

“It follows then that it has selected no candidate to contest these elections,” a statement at the time added. “Discussions between the party and the SDLP are ongoing and a statement on our future intentions will be made in due course.”

In his statement, Mr Daly said he had in the last number of years “worked closely with John Deasy TD in his role as the Government’s US Envoy, our party spokespersons on foreign Affairs, members of the US Congress, as well as the White House on the proposed visas for Irish citizens.”

He said he has been “working closely” on a US visa deal for Irish people.

“I have been working closely with all sides and hope to continue to assist in this important issue and if necessary go to DC, as we work to reach an agreement in the coming weeks.”