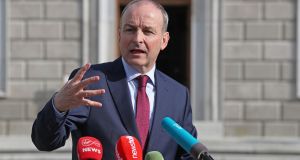 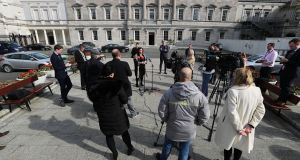 More information should be provided on the location of clusters and cases of coronavirus around the country, Fianna Fáil leader Micheál Martin has said.

Mr Martin, speaking ahead of a meeting of all party leaders on the crisis, also called for further restrictions on the movement of people but did not call for a full national lockdown.

Mr Varadkar has indicated he will not do so and the Government says any decisions will be taken on foot of advice from the National Public Health Emergency Team (NPHET) and Chief Medical Officer Dr Tony Holohan.

Mr Martin said rumours of the locations of outbreaks are counterproductive to “good behaviour”. While he said that regional restrictions on movement could be put in place, he said greater transparency is more likely to encourage people to change their behaviour if they know there is a cluster in their area.

He said “severe restrictions are required in terms of public gatherings”, adding: “It’s all about protecting our senior citizens, protecting people with underlying conditions.”

Mr Martin also called for a strong programme of income supports similar to that introduced in Denmark, where the State pays up to 75 per cent of person’s salary to a certain limit, and in the UK, where the payment is up to 80 per cent of salary, again to a limit.

“Substantive supports for employees, people who’ve been laid off in particular sectors and in line with other countries, but also maintaining the link between the worker and the enterprise,” he said. “ Because I think that is the key so that the enterprise, when this is over, can restart as quickly as possible. And for that to happen, there will have to be softer loans, interest free loans and working capital supports.”

The Government is expected to finalise the details of a package of supports in the coming days.

Mr Martin raised concerns about the time it is taking to carry out coronavirus tests as well as “anxiety” about personal protective equipment for medical staff.

“We know that the HSE has put in significant orders. But there needs to be straight up transparency and honesty with staff and with people across the country in relation to that issue.”

Ms McDonald said it is “obvious now at this stage that we’re at the point where the emergency measures to protect people need to be stepped up very significantly”.

She said it is “intolerable” and “unacceptable” that some people are in workplaces where physical distancing cannot be adequately practiced.

“It’s unacceptable that working people are being left with so much risk. People that work on construction sites, in factories, in call centers…know that when they go to work, that they’re not safe because it’s simply not possible, in so many cases, to practice safe physical distancing.

“Delay costs lives. That’s the lesson from other countries. We should not drag our heels now. ”

She said while this could lead to “hundreds of thousands of temporary redundancies” an “adequate income support scheme” should be put in place.

Mr Varadkar earlier called a suggestion from Ms McDonald that the money from the Apple tax case be used for such supports “rubbish”.

“Mary Lou McDonald should know better,” he said. “The Apple money is in an escrow account and that’s where it’s being held until the European courts decide where that money’s going to go.”

Ms McDonald said: “I’m not interested in having a squabble with him as to where the money is raised. It’s going to be an expensive scheme, but it’s absolutely necessary.”

The Government has been criticised for its financial support commitments to employers and employees adversely affected by the Covid-19 emergency, which is below the average of the packages that have been offered by other EU governments. The €203 payment announced earlier this month for those who have lost their jobs has come in for particular criticism as being far too low.

Mr Varadkar said on Monday the Government had been working on an income support package over the weekend and would hopefully be in a position to conclude it over the next 24 hours.

“There are really two aspects of what we need to do. One is an enhanced payment for people who’ve lost their jobs, and the other is payments for employers to encourage them to keep people on their payroll.

“So as you know, for somebody who’s lost their job. They get a minimum now €203 a week, as compared to only £100 a week in Northern Ireland, or the UK, but we think that’s too low, given the circumstances, and we need to hold our society together.”