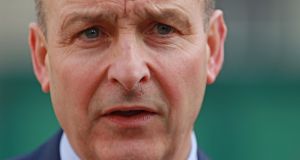 Fianna Fáil and Fine Gael have traded insults over each other’s housing policies in an early sign of what is likely to be one of the major battlegrounds in the next general election.

He said Fianna Fáil would introduce a rent freeze, change Central Bank lending rules to ensure rental payments are taken into account when people apply for a mortgage, establish a shared ownership scheme to allow the State take a stake in people’s homes, provide €2 billion for an affordable housing scheme and start a “special savers scheme to help tenants save up a deposit to get out of the rip-off rental market”.

“The reason for this is not that young people are squandering their wages on avocado toast. Nor is it because they want to live with Minister [for Housing Eoghan] Murphy in what he calls boutique-style hotels or what the rest of us call extortionate chicken-battery bedsits. The real reason is a failure of government policy.”

“All they have are slogans and soundbites. But now we are seeing some scant detail and even that is very worrying because it is so lacking in substance.”

Mr Murphy accused Mr Martin of wanting to interfere with Central Bank independence. “His government did that before and it collapsed the housing sector and the economy.”

He said the Government has already brought in a shared ownership scheme and that Fianna Fáil supported it and the wider Rebuilding Ireland plan.

Mr Martin responded by saying the Minister and Taoiseach should “knock on the doors of the northside of Cork and they would find out pretty quickly what people think of their failed housing policies”.

He added: “Photos of hard hats and shovels in the middle of a byelection won’t cut it.”