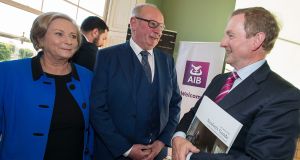 Candidates for the Fine Gael leadership are to be compelled to sign up to a “fair play contract” that will attempt to keep the contest to succeed Taoiseach Enda Kenny as party leader clean.

A document will be drawn up by the party hierarchy over the coming days if Mr Kenny stands aside as party leader today.

Those who have spoken to Mr Kenny in recent days believe he will trigger the contest to succeed him when his parliamentary party meets this evening , but he has not provided a specific timeframe.

Mr Kenny spoke last night at the launch of The Irish Times’ Nealon’s Guide to the 32nd Dáil and Seanad. Asked as he left the event if he will be making an announcement today, Mr Kenny replied: “Now, now.”

One person who spoke with Mr Kenny in recent days on the matter said the Taoiseach, while not being specific, gave the impression his departure is imminent. He has told friends he will make “an announcement” at the meeting but even Cabinet Ministers were unsure of the Taoiseach’s intentions yesterday.

Sources said Mr Kenny had been ignoring calls from party officials in recent days. “He’s battening down the hatches,” said one figure.

The move follows on from the distribution of polls by supporters of Minister for Housing Simon Coveney which sought to assess the levels of support for Fine Gael if the party was led by Mr Coveney or his rival for the leadership Minister for Social Protection Leo Varadkar.

Although Mr Coveney’s supporters stood over the data, those in Mr Varadkar’s camp have disputed the findings.

The plan will be drawn up by the Fine Gael ethics committee, a group of senior party officials tasked with managing the leadership race. Its contents will not be settled until after Mr Kenny stands aside.

It was announced last night that Mr Kenny will attend the centenary commemoration of the Battle of Messines in the first World War. He will visit the site on his way back from a trade mission to the United States on June 7th.

He will, however, be back in Ireland on the same day – tipped to be the day when TDs cast their ballots in the leadership contest.