Fancy owning a naval ship? 'LÉ Aisling' to be auctioned 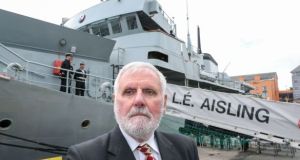 Nicknamed ‘the last of the Mohicans’, the LÉ Aisling set the bar under its first captain, the ‘Sheriff’, Lieut Cdr Peadar McElhinney. Photograph Joe O’Shaughnessy

One of the longest serving ships in the Irish Naval Service is to go under the hammer at auction in Cork next month some nine months after it was decommissioned from service.

The LÉ Aisling will be put up for auction at the Carrigaline Court Hotel on March 23rd where Cork auctioneer Dominic Daly will seek to obtain the best price for the State for the ship.

One of four Irish Naval Services ships to be built at Verolme Cork Dockyard, the LÉ Aisling went into service in 1980 and was decommissioned last June after over 35 years of service.

During that time, the LÉ Aisling was involved in some of the most dramatic episodes in the Naval Service’s history including the apprehension of the Marita Ann with guns for the IRA in 1984.

Together with her sister ships, LÉ Emer and LÉ Deirdre, the LÉ Aisling, under the command of Lt Cdr Jim Robinson, shadowed the trawler Marita Ann as she left her home port of Fenit.

The Marita Ann met up with the trawler Massachuseetts trawler Vahalla which had brought some seven tonnes of armaments from the US for the Provisional IRA.

The Marita Ann ignored warnings from the LÉ Emer to stop after collecting THE arms consignment outside Irish territorial waters but the trawler stopped after crew on the LÉ Emer fired off a few rifle rounds.

The Marita Ann gave up after the burst of gunfire and was boarded by gardaí and Naval Service personnel two miles inside the Irish territorial water limit where they found five men on board.

Among these was future Sinn Féin TD, Martin Ferris who was arrested and subsequently jailed for ten years for his part in trying to smuggle seven tonnes of arms and ammunition into Ireland.

A year later, the LÉ Aisling was one of the first ships to reach the scene of the Air India disaster off the Irish coast when all 329 passengers and crew on board the plane were killed in a bomb attack.

The LÉ Aisling’s crew, under the command of Capt Jim Robinson, recovered 38 bodies littered among the wreckage of the aircraft, which was located 160km off the south-west coast.

Ten years later in 1995, the LÉ Aisling was involved in the prolonged search off the Donegal coast for the Greencastle based fishing vessel Carrickatine which disappeared with the loss of all six crew.

And just a year later, in 1996, it assisted the Japanese tuna boat Taisei Maru after it lost five crew in a gas poisoning incident (386km) 240 miles off Galway and escorted the ship to Haulbowline in Cork Harbour.

The LÉ Aisling, which has travelled 628,856 nautical miles, the equivalent of travelling around the world more than 32 times, has been twinned with Galway for over 20 years.

Last year at its decommissioning ceremony in Galway, the city’s deputy mayor, Cllr Pearce Flannery suggested the ship could become a floating museum in Galway Harbour or off Salthill.

Minister of State at the Dept of Defence, Paul Kehoe said: “The question of using the former LÉ Aisling as a visitor attraction in Galway City has been raised with me and is under consideration.

“I am advised that given the age, size, structure and layout of Naval Service vessels that they are considered rather unsuitable for conversion to use as museums or visitor attractions.”

Next month’s auction of the LÉ Aisling follows the sale of the LÉ Emer at auction in 2013 when it fetched €320,000 for the Exchequer when it was sold to a Nigerian businessman, Cyprian Imobhio.

But in July 2014 the LÉ Emer was impounded by the Nigerian Navy because Mr Imobhio had failed to secure the necessary military approval before bringing the ship into Nigerian waters.

On February 19th 2015 the LÉ Emer, which had been stripped of its armaments before being put up for sale, was commissioned into the Nigerian Navy as a training ship and renamed NNS Prosperity.