Family, sports and faith to the fore as hundreds gather to remember Det Colm Horkan 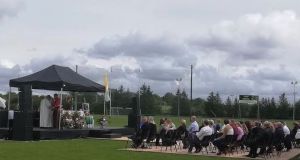 The hundreds gathered at Fr O’Hara Park in Charlestown, Co Mayo, on Sunday for the month’s mind of Det Garda Colm Horkan burst into applause when reminded of a goal he scored aged 14. Although nearly 50 years of age at the time of his death on June 17th, Horkan’s hometown of Charlestown still gushes about his sporting achievements from the age of 10 up. He won medals at every age group for football, those gathered at the GAA stadium heard.

It was a very different service to the State funeral broadcast to the nation on June 21st after Horkan was shot to death in Castlerea, Co Roscommon. Organised by the local community and members of Charlestown Sarsfields GAA club, the service saw Horkan’s friends, neighbours, club mates and colleagues fill the stalls of the stadium. The service was held at the sportsground to allow for public health restrictions amid the Covid-19 pandemic, but it was also a fitting location, given that it was the place where Horkan spent nearly 40 years as a player, spectator and coach.

“I have a sense of his standing on this ground. This is where Colm stood and where he, no doubt, fell down a bit and brought others to the ground too,” Fr Vincent Sherlock said during the service. Sarsfields GAA “mattered” to Horkan, and there were many of his club mates present whose “hearts are broken”, Fr Sherlock added. Six members of the U12 team that Horkan coached and mentored read aloud condolences sent by GAA clubs from around the country.

Charlestown parish priest Mgr Tommy Johnston said it has been a “very difficult time” for the many people Horkan had impacted on throughout his abbreviated life.

“Over just six weeks the Horkan family and, indeed, the whole community here in Charlestown have felt the grief that hit us so tragically . . . in the death of Colm Horkan,” he said.

In another world Colm Horkan would have taken leave from work this week to attend the Galway Races, Mgr Johnston said. A Cheltenham racecard was brought to the altar at the stadium as a symbol of Horkan’s passion for horse racing. On the afternoon of the day of his death he had watched the racing on television with his father Marty.

Family, sports, faith and the Garda were the central elements of Horkan’s life, Fr Sherlock said. He was a man people approached for “advice that was solid, advice that was heeded”.

“The silence of the town and the solace of the community . . . The dignity of you as people in paying your respects to Colm, I saw it in a way I had never seen it before,” Fr Sherlock said, referring to Charlestown’s response to the death.

Speaking to Horkan’s father Marty, Fr Sherlock said: “It is the belief in our heart of hearts that your son is there in heaven, Marty, and it is a better place with him there.”