Family opts to squat after rejecting house offered by council

Eviction battle underscores at times difficult links between Travellers and others

John Paul Doyle his wife, Frances, and six children are squatting in a house in Keenagh Co. Longford. Moving in there has sparked a fight with the local authority that has taken him to the High Court. Video: Brenda Fitzsimmons 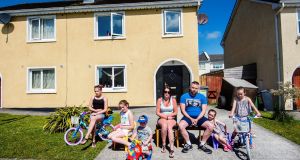 John Paul Doyle with his wife Frances and five of their six children at a house in Keenagh, Ballymahon, Co Westmeath where they are squatting until the council finds them alternative accommodation. The children are, from left, Jordanna (14), Frances (10), John Paul (2), Mary (6) and Winnie (7). Photograph: Brenda Fitzsimons/The Irish Times 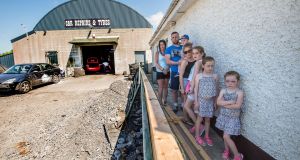 John Paul Doyle with his wife Frances and five of their six children in the back garden of a house offered to them by Longford County Council. The house is adjacent to a working garage with a large petrol station across the road. Photograph: Brenda Fitzsimons/The Irish Times

When John Paul Doyle hired a locksmith to enable him and his family to break into number 21 Casey Court in Keenagh – 12km south of Longford town – and take up residence as squatters, he sparked a fight with the local authority that has taken him to the High Court in Dublin and is underscoring the at times difficult relationship between Travellers and others.

“The man didn’t have a clue what he was doing. It’s not his fault,” says Doyle, sitting in the front room of number 21 on a bright sunny day this week, absolving the locksmith of any wrongdoing for what he facilitated on April 12th.

With Doyle in the room are his wife Frances and their youngest child, John Paul jnr (2). The couple have five other children: Michael (17) who is now living with his girlfriend; Jordanna (14) who has a heart murmur; Frances (10); Winnie (7); and Mary (6).

The youngest whizzes a handheld toy bus around the laminated wooden floor, squealing with pleasure and occasionally running outside to play with other toys scattered about the small front lawn.

In the back garden, two lurchers, Elas and Toby, lounge about, while a yappy poodle also announces its presence.

Casey Court is a quiet cul-de-sac of 42 local authority homes of varying sizes, and looks to be less than 10 years old. The estate is well kept and well managed. Front lawns are trimmed, and the grassy open space in the centre of the cul-de-sac is a safe place for children to play and socialise with their neighbours.

Number 21 is in good condition and was vacant for about two months before the Doyles broke in. It has three bedrooms and two bathrooms, a front room and a well-equipped kitchen, and was being done up for another family.

Several Traveller families live on Casey Court alongside other families.

The Doyles are Travellers, although they have been settled for all of their lives. Like everyone else, they view their situation through the prism of their background and upbringing.

Doyle is 36, while Frances is 37. They have been together since they were 18, having met at a Halloween party in Longford.

Doyle is an intelligent, articulate and able-bodied man, but he has never had a job, something he attributes to his illiteracy.

“I’m unemployable. Disability, learning disability; reading and writing,” he says. “I’m on the disability. I’m getting €490 a week. That’s everything. You have to try to do your best with that few hundred you get.”

Frances and John Paul – who also has a sister living on Casey Court – have been offered accommodation by Longford County Council in a private rented, four-bedroom house at Stonepark, about 4km south of Longford town, further along the R397 road to Ballymahon that also passes through Keenagh.

The Doyles would have to pay just €42 a week rent, with the remainder of the cost being paid by the State.

The husband and wife say the council would never offer such a property to another family with young children – “I wouldn’t take the house for nothing,” says Doyle – and at first glance, it appears far from suitable.

The house is an extended, single-storey cottage surrounded on three sides by a working repair garage. It has no garden, front or rear, and there is no barrier of any description between the front of the house and the busy R397.

On the far side of the road from the cottage is Maguire’s petrol station and shop.

“Look at that ice-cream sign,” says Doyle. “All I see when that front door opens is the little one running out, over there, straight across that road and bang! That’s the end of it.”

The garage that wraps around the cottage is called Stan’s Garage and is run by Stanislaw from Poland, a hard-working, jolly fellow who has been living in Ireland for 11 years. His vehicle-servicing, repair and tyre-changing business has picked up a lot in recent times.

Behind the cottage, there is the large forecourt-cum-waiting yard for Stan’s garage, a breeze-block and corrugated metal shed. The area is strewn with cars, in various states of repair, and the detritus of a busy motor repair business.

From inside the garage there comes the rasping screech of pneumatically driven power tools, removing and replacing wheels on vehicles, some of them elevated on hoists for inspection and repair.

The space at the back of the cottage in all of this is a mere 4ft wide passage that runs the length of the building. It is a crudely defined space, carved out by wooden fence posts, wire, netting and a cannibalised garage sign – and could serve no useful purpose for a family beyond all-weather storage.

“They wouldn’t put anyone else in a house like that,” says Frances.

Doyle agrees, describing the property as “this kip hole”.

How the Doyles got to where they are is a not-unfamiliar story.

The landlord of their State-subsidised home in Ballymahon wanted the property vacated for his own family and served notice. The Doyles, who say they have been on Longford’s housing waiting list for almost three years, were initially offered separate male/female hostel accommodation last December, but refused this because the family would be broken up at Christmas.

“At this stage, we’re already sleeping in the back of the jeep. We spent two months in the back of my Hyundai – then a family member intervened and they kept us for Christmas,” Doyle says.

At night, he parked the 4X4 where he could – “on the banks of canals, rivers, anywhere” – and then spent two weeks with his brother over Christmas, followed by eight weeks in a two-bedroom bungalow with his disabled uncle in Ballymahon, the uncle sleeping on a couch.

“Things got out of hand then; we had nowhere to go,” Doyle says.

The next stage was the April 12th break-in and squat, prompting the High Court eviction action by the council, which has assigned the Casey Court home to another family on the housing list, on which there are 1,200 other people.

Other local people and councillors are reluctant to talk about the situation.

The owner of the cottage rejected by the Doyles says the matter is an issue between them and the council.

One councillor, who spoke on condition of anonymity, accused the Doyles of “playing the Traveller card” and said some residents of Casey Court were annoyed at the manner of their occupancy and the fact that rent was not being paid.

Last Thursday week, the High Court gave the Doyles eight weeks to vacate the house on Casey Court, but they have no intention of moving if the alternative is the Stonepark cottage.

“The council will have to try to get the sheriff and that’ll take another while, I’d say,” Doyle says. “I’m going to appeal it. I don’t know how it works. There’s no one trying to help me.”

Frances Doyle says: “Everyone knows we’re homeless and the situation we’re in and no one has gotten to contact us, to give us a voice, what to do, how to help. No one.”

Longford has for many years had the highest number of Travellers per head of population.

Statistics suggest a higher percentage of Traveller families receive accommodation assistance relative to their numbers in the county population overall.

The 2011 Census showed that for every 1,000 people in Longford, 19.1 of them were Travellers, equating to approximately 5 per cent of the population of the county.

In the 2006 Census, this amounted to 542 Traveller people. At the time the local authority devised its Traveller Accommodation Plan 2014-2018, it stated there were 744 Travellers living in Longford.

Various accommodation options are detailed in that plan.

These include voluntary house-buying. In 2013, there were two such Traveller purchases.

In the same year, 12 Traveller families were housed by the council in what is described as standard local authority housing.

In 2013 the authority estimated there were 44 Travellers on the housing waiting list, representing 4.4 per cent of approved housing applicants.

In that year there were 128 housing allocations by the council, and Traveller recipients represented 9.4 per cent of these.

Some 63 Traveller families were in receipt of rent allowances for private rented accommodation. This is out of a total of 509 families helped under this scheme.

At the time the plan was drawn up, two Traveller families were living in a halting site at Willow Park.

No other Traveller families had indicated a wish to live there, and so the council planned to refurbish the site to accommodate the needs of the two families that were there.

The council stated in the 2014-2018 plan that it had exceeded its target in the preceding plan, while acknowledging that the refurbishment of Willow Park halting site had not been carried out.