‘The only way to overcome hatred and intolerance is with love, understanding and kindness’ 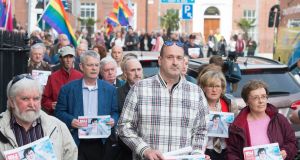 The family of murdered journalist Lyra McKee have paid tribute to her, saying she was “a gentle innocent soul who wouldn’t wish ill on anyone”.

Ms McKee (29) died as a result of injuries sustained when she was shot on the Creggan estate in Derry on April 18th.

The statement was issued on the eve of her funeral in Belfast on Wednesday which will be attended by President Michael D Higgins and Taoiseach Leo Varadkar at St Anne’s Cathedral.

The family asked “that Lyra’s life and her personal philosophy are used as an example to us all as we face this tragedy together. Lyra’s answer would have been simple, the only way to overcome hatred and intolerance is with love, understanding and kindness”.

It asked everyone who knew her to “continue her message of positivity and hope, by respecting her memory with dignity and respect. We as a family know that the whole community has been touched by the events of Thursday night and that many are rightly angry.

“On Thursday April 18th our beautiful Lyra was taken from us. A daughter, a sister, an aunt, a great-aunt, a partner, a niece, a cousin, and above all, a best friend and confidante to so many of us,” the statement said.

“A friend to all, a gentle innocent soul who wouldn’t wish ill on anyone. Such a warm and innocent heart, she was the greatest listener, someone who had time for everyone.

“She was a smart, strong-minded woman who believed in passionately in inclusivity, justice and truth. Lyra spoke to and made friends with anybody and everybody, no matter what their background, those of all political views and those with none. This openness, and her desire to bring people together, made her totally apolitical.”

The statement, issued through Kinnear & Co solicitors, thanked “everyone for the outpouring of support and love we have witnessed this past few days. It has been of immense solace that Lyra meant so much to so many.” The family requested privacy.

Earlier on Wednesday evening, Britain’s secretary of State for Northern Ireland Karen Bradley has rejected apologies for the killing of journalist Lyra McKee, saying her murder was “no accident”.

Speaking in the House of Commons Ms Bradley said: “To those responsible for this act of terrorism, we say we have heard your excuses and your hollow apologies. No one buys it.

“This was no accident. There is nothing that can justify this murderous act and you are being called out for what you really are.”

The New IRA admitted responsibility for the death of McKee in Derry. In a statement given to The Irish News using a recognised code word, the group offered “full and sincere apologies” to her family and friends.

The New IRA is an amalgam of armed groups opposed to the peace process and it recently claimed responsibility for parcel bombs sent to London and Glasgow in March.

Police believe the violence was orchestrated in response to an earlier search by officers aimed at averting imminent trouble associated with this week’s anniversary of the Easter Rising.

The statement said: “On Thursday night following an incursion on the Creggan by heavily armed British crown forces which provoked rioting, the IRA deployed our volunteers to engage.

“We have instructed our volunteers to take the utmost care in future when engaging the enemy, and put in place measures to help ensure this.

“In the course of attacking the enemy Lyra McKee was tragically killed while standing beside enemy forces.

“The IRA offer our full and sincere apologies to the partner, family and friends of Lyra McKee for her death.”

Ms Bradley said the “voices of peace” are “louder than those who peddle hate and division in a city with so much to offer.”

Ms Bradley added: “There is definitely a sense on the ground that this is the end. People don’t want to see this happen again.

“Those communities that have been oppressed by the terrorists, oppressed by the dissidents, made to live on estates in a way they don’t want to, live in those estates and not be part of that, are standing up and saying no, not in my name.”

He said: “It is important we do remember the brightness of Lyra’s life, and we said this was a life well lived. A young woman who most certainly was a child of the peace agreement.

“A young woman that lived her life in the way she chose to live it and campaigned for the things she believed in. And we should remember that bright spark, not simply to remember the way in which that spark left the world.”

Meanwhile a vigil was held opposite the Garden of Remembrance in Dublin city centre on Tuesday evening. It was organised by the National Union of Journalists.

On Tuesday evening, the PSNI said it released unconditionally, a a 57-year-old woman arrested earlier today over the killing. Detectives from the PSNI Major Investigation Team continue to appeal for help from the local community in Creggan or anyone with information.

Three people have now been arrested in connection with Ms McKee’s death. Two individuals who had been detained were released without charge.

Meanwhile Tánaiste and Minister of Foreign Affairs Simon Coveney travelled to Northern Ireland to discuss the current impasse in Stormont in light of the death the journalist.

Sinn Féin leader in the North Michelle O’Neill was seen arriving for the meeting late on Tuesday afternoon. A spokesman for the Alliance Party told the Press Association: “Simon Coveney and Naomi Long have had a phone call this morning and will be speaking again later today.

“We are aware the Tánaiste is travelling to Belfast for a series of private meetings.” – PA