Family of Chelsea Manning lobby TDs for her early release 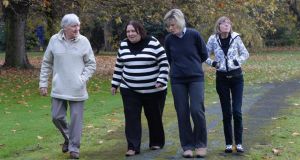 Members of the family of US Army Private Bradley Manning appealed in Dublin yesterday for people to support his early release from prison in the US.

The family say they are seeking unspecified support from people in the hope of raising awareness of Pte Manning’s case and circumstances.

Pte Manning was sentenced to 35 years in jail in August after being convicted under the US Espionage Act of leaking some 700,000 classified documents, the largest number of secret papers disclosed to date to the WikiLeaks organisation.

He has the right to apply for parole after eight years and, whenever he will be released, will be discharged dishonourably from the US army.

At his trial, Pte Manning claimed he disclosed the information to show “the true cost of war”. He also apologised for his actions, saying that at the time he was “dealing with a lot of issues”.

The trial heard evidence that an army psychiatrist was treating Pte Manning before his arrest for, among other things, gender-identity problems. Since conviction, Pte Manning has requested hormone replacement therapy, which the army has refused, as part of a programme of transgender therapy.

He and his family now refer to him as Chelsea Elizabeth Manning and apply the female pronoun. Pte Manning was born in Oklahoma but the family’s antecedents are both Welsh and Irish.

His mother, Susan Fox, came from Haverfordwest in south west Wales, her people having emigrated there from Rathmines in Dublin in the 1940s.

They say that are proud of Pte Manning’s actions and defended what he did.

“I think she was very brave to do what she did,” said Sharon Staples, an aunt. “That took a lot of courage. Maybe, yes, she should have been punished but to look at the sentence. . . back in our country, you get less for murder.”

“You’ve got to come out with the truth,” said an uncle, Kevin Fox. “It might have been swept under the carpet if he hadn’t. That’s the only way he could have went about it anyway.”

Ms Staples said Pte Manning’s period in custody prior to trial has been difficult.

“When she was in custody she was not allowed out of the cell. She was stripped and made to stand for 20-something hours a day. Being so far away and hearing that and knowing there was nothing you could do, that was a struggle. You wouldn’t treat an animal in the way they treated her.”

The family are not calling for specific actions by the public but hope that someone can come up with suggestions that alleviate their and Pte Manning’s situation and help achieve an early release.

Said Ms Staples: “At the end of the day, we don’t know what to do. So we’re just asking for any guidance. We haven’t always felt she’s got the backing she deserves.

“A lot of people have just closed the door on it and just don’t want to know but you can’t allow things like this to just go on and be covered up. There’s got to be somebody out there that can help.”

She said the family had received no help from the UK government or Welsh authorities. The only politician to take an interest has been the Labour Party MP, Ann Clwyd.

On Pte Manning’s gender reassignment therapy, the family felt that the US authorities would “put every obstacle in her way to stop it”. The prison authorities are on record saying they will provide support but not treatment.

“The army does not provide hormone therapy or sex-reassignment surgery for gender identity disorder,” said a statement issued in August by the US Disciplinary Barracks at Fort Leavenworth, Kansas, where Pte Manning is held.

Citing a policy of non-discrimination based on race, rank, ethnicity or sexual orientation - but not gender identity - the statement added: “All inmates are considered soldiers and are treated as such with access to mental health professionals, including a psychiatrist, psychologist, social workers and behavioural science non-commissioned officers with experience in addressing the needs of military personnel in pre- and post-trial confinement.”