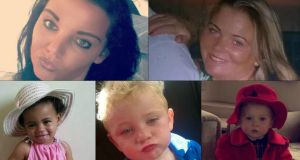 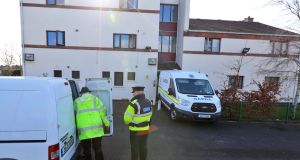 Gardaí continue their technical examination of the scene at Cluainin Cronan on Kilcronan Avenue, Clondalkin, where four died in a fire on Wednesday. Photograph: Colin Keegan/Collins Dublin

Three of the families who were living in the apartment complex in Clondalkin where a woman and three children died in a fire have been rehoused in Dublin.

Annmarie O’Brien (27) and her two-year-old daughter Paris died in a blaze at a step-down facility for victims of domestic violence on the Kilcronan estate in Clondalkin on Wednesday. She was from the Traveller community in Bray and heavily pregnant.

Brigid O’Brien, known to family and friends as Biddy, who was visiting her Annmarie on Wednesday, remains in a critical condition in St James’s Hospital after being rescued from the apartment.

Biddy’s daughter Holly (3) also died in the fire while her son, Jordan (4), died in hospital.

Two other children from the apartment block were treated for smoke inhalation but their condition was not thought to be life-threatening.

The tragedy happened at a modern step-down facility of four apartments and six houses on the Kilcronan estate run by Sonas, a provider of emergency refuge and interim accommodation, support and advice to women and children at risk of domestic violence.

Chief executive of Sonas Fiona Ryan confirmed on Thursday that three families living in the apartment complex had been rehoused at the Sonas refuge and at two other step-down facilities. The families’ apartments were damaged during the blaze.

Ms Ryan said on Wednesday that everyone in the organisation was “devastated” at the deaths. Fire alarms and smoke detectors in the apartments had been tested recently and were working, she added.

“Our sympathies and condolences are with the relatives and friends of the deceased and all those impacted by this awful tragedy,” she said. “We are devastated by the tragic loss of life which occurred as a result of fire in an apartment in our supported housing complex in Clondalkin.”

Meanwhile, gardaí continued their assessment on Thursday of the apartment where the fire took place and are carrying out a forensic examination of the scene in an effort to determine the cause.

It is believed the four deaths were caused by smoke inhalation. Garda and Dublin Fire Brigade forensic investigators examined the apartment and are understood to believe the fire was started by an electric fault and was not malicious.

Twenty-nine women and children were living in the complex.

Jim O’Brien, who works with Bray Travellers community development group and is Annmarie O’Brien’s cousin, told RTÉ’s News at One that support for the family and local community since the fire had been “overwhelming”.

“Prayers help and that’s deep in our cultural background in terms of religion,” he said. “That’s exactly what we’re doing at the minute. We’re praying to God that Biddy will make a full recovery.

“The support that has been coming through the officers of Bray Travellers and the emails of best wishes, thinking about it has been overwhelming. I’d like to thank everyone for that.”

The three-storey apartment block and homes used by Sonas were built in 2000 and have the appearance of being well-maintained. Security cameras scan the entrance and approach to the apartments, which may only be accessed by a key-code pad.

Expressions of sympathy were led by President Michael D Higgins who, speaking at an event to mark International Women’s Day, said: “All our hearts must go out to these women and children.”

Taoiseach Enda Kenny also expressed his “deep sympathies” at the loss of life.

Many local people spoke well of the residents of the apartments and houses and expressed sorrow at the deaths. Flowers, soft toys, cards and candles were being left by the entrance to the apartments which overlooked a peaceful stretch of the Grand Canal.

Local Sinn Féin TD Eoin Ó Broin visited the scene and said the community in Kilcronan was tight-knit and supportive during trying times.

“My thoughts are with the bereaved families, friends, and members of this tight-knit local community,” he said.

“The death of young children and a young woman is a tragedy and the people here are numb with shock and sadness at this devastating loss of life.”