Féile returns with a classical twist 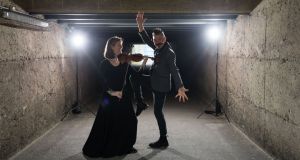 The Féile music festival, which became known as the Trip to Tipp, is to return this September to Semple Stadium in Thurles, Co Tipperary after a 21-year hiatus.

The festival debuted in 1990 and gained a huge following thanks to performances from acts such as Meat Loaf, Van Morrison, Iggy Pop and Elvis Costello. Other artists to play the event over the years included Simply Red, Bryan Adams, INXS, Happy Mondays, Primal Scream, Foo Fighters and the Prodigy.

Between 1990 and 1997 the festival was held in Semple Stadium with the exceptions of 1993 and 1996 when it was held in Cork’s Páirc Uí Chaoimh and Dublin’s Point Depot respectively.

Organisers on Tuesday announced the festival was returning under the name “Féile Classical”.

The Stunning, Hothouse Flowers, An Emotional Fish, the Frank and Walters, The 4 of Us and Something Happens are among the acts that will perform this year, all with accompaniment from the Irish Chamber Orchestra. Newstalk presenter Tom Dunne, the Something Happens frontman, will play host.

Tickets for the one-night only, fully seated event are priced at €49.50 and go on sale on Friday.