Experts to examine case of gallantry medals for Jadotville veterans

The names of the 33 men from A Company, 35th battalion who were involved in the siege of Jadotville, Congo in 1961 have been read into the record of the Seanad. Video: Oireachtas TV 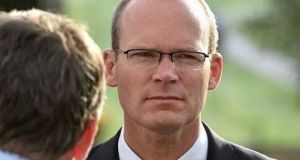 Simon Coveney said the Government had sought to recognise the veterans of siege by awarding a unit citation in 2016 and a specially commissioned Jadotville medal in 2017.

The issue of medals for gallantry for the Irish soldiers involved in the siege of Jadotville will be considered by an independent group of experts.

Thirty-three men from A Company, 35th battalion were recommended for the Distinguished Service Medal (DSM) for gallantry by their commanding officer Colonel Pat Quinlan arising out of the siege which occurred in September, 1961.

Of the 33, five were also recommended for the Military Medal for Gallantry (MMG), the Irish army’s highest award.

A Company was besieged by a mixed force of soldiers from the breakaway Congolese province of Katanga and foreign, mostly French and Belgian, mercenaries.

The Irish contingent on United Nations duty managed to hold out for five days against an overwhelming force without suffering a single fatality, while inflicting huge casualties on the enemy, some 300 dead and 750 wounded.

After their capture and later release, A Company were regarded in some circles as having surrendered ignominiously.

The dreaded sobriquet “Jadotville Jack” came to be attached to the men of the Company.

A cross-party group of senators comprising of Malcolm Byrne (FF), Fiona O’Loughlin (FF), John McGahon (FG), Mark Wall (Lab) and Ger Craughwell (Ind) lobbied on behalf of the veterans of Jadotville and their relatives for a reconsideration of the original decision not to award medals for gallantry to the men cited by Col Quinlan.

In response, Mr Coveney told the Seanad that he and Vice Admiral Mark Mellett, chief of staff of the Irish Defence Forces, had come to the conclusion that an independent review group was the best way forward.

The group will “examine the entire case, including new evidence if any is available”.

The board will include ex-army officers, a historian and an academic who will be able to frame the siege of Jadotville in its proper context and what happened in some detail.

“We will have genuine and independent expertise examining this case,” the minister told the Seanad.

It will report to the chief of staff and then to him by next spring.

Though the Minister for Defence is authorised to make recommendations for medals, Mr Coveney said it would be wrong if medals were issued on foot of political lobbying or as a political decision.

There was a “well-established process” within the Defence Forces, he pointed out, and a military board had already examined the men’s cases for medals in 1962 and 1965.

“I don’t believe that we can move to a situation where politicians decide who gets medals and what kind of medals they get in terms of service at either home or abroad,” he said.

“This has to be a decision that comes from the military themselves. This is how this works. Otherwise we move into a space of trying to please people politically as opposed to robust assessment through military structures, through a medals board in these cases.”

He pointed out the Government had sought to recognise the veterans of siege by awarding a unit citation in 2016 and a specially commissioned Jadotville medal in 2017.