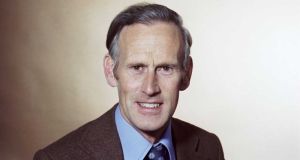 Mr Cockburn joined RTÉ as a part-time Raidió Éireann announcer in 1958 before becoming a full-time employee in 1972.

He became a household name through anchoring RTÉ’s main evening news programming over many years, and retired in 1992.

Don Cockburn reading the news sparked my interest in current affairs. I believed every word. An amazing broadcaster. RIP https://t.co/cK4SLnA3sN

Mr Cockburn is survived by his children Evelyn and John and his grandchildren. His wife Marie had died previously.

“Sad to learn of #DonCockburn’s passing: one of #RTÉ’s finest over many years. Our thoughts with his friends & family,” he said.

His body will be reposing at his home on Wednesday from 5pm to 7pm.

His funeral Mass will take place on Thursday at 10am in the Church of St Thérèse, Mt Merrion, followed by burial at Deansgrange Cemetery.