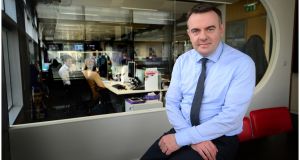 Noel Curran, who led the broadcaster until 2016, said that ‘never before in Europe have we seen the concentration of such power and public reach in a few multinational, mainly US-owned, entities. It’s unprecedented.’ Photograph: Bryan O’Brien

Former chiefs at RTÉ have called for “political leadership and direction” to solve the “dilemma” at the national broadcaster, as well as for urgent reform of the licence fee system.

Noel Curran, the former director general of the organisation, and Fintan Drury, who was chairman of RTÉ in 2005-2006, both said healthy public service media organisations played an important role in democracies, and were coming increasingly under pressure.

Mr Curran, who led the broadcaster until 2016, now leads the European Broadcasting Union (EBU). He said that “never before in Europe have we seen the concentration of such power and public reach in a few multinational, mainly US-owned, entities. It’s unprecedented.”

“Governments, including in Ireland, have to decide do they want a counterpoint to this? Do they want organisations who invest in domestic and European content? Do they want strong independent news, investigative journalism, diverse languages, cultural output across a spectrum of music to drama – and if they don’t then they should explain why to the public.”

He said Ireland has one of the highest licence fee evasion rates in Europe, and an increasing number of people who now access public programming online. “The licence fee system needs to be urgently changed to address these two issues. I don’t know why that is considered to be so radical or difficult to achieve? Even if you put the arguments about RTÉ’s needs to one side, surely the vast majority of Irish people who do actually pay their licence fee deserve that.”

Mr Drury, who was chairman of the organisation for a year, said financial crises at the broadcaster were “nothing new”, and that while RTÉ had to take some responsibility for this, “the greater fault lies with the legislature”.

He said the Oireachtas and the Government had a responsibility to steward the organisation, which “successive governments and successive parliaments have failed to do”. “The RTÉ dilemma is not easily solved. Each year that passes without any attempt to address the fundamentals adds to the complexity of the challenge. To solve it needs vision and courage, things that appear as lacking in today’s Government as in any.”

He argued that Moya Doherty, the current chairwoman, and Dee Forbes, the director general may “have no choice but to design a bold, if appropriately narrower future for the station which the Government either supports or not, and a consequence of supporting it would be that the politicians inform the public of the cost and how it will be funded”. He said public service broadcasting must be protected “given the madness so evident across the globe where dark forces have infiltrated so much of contemporary media with such destructive outcomes”.

RTÉ management met trade unions on Monday, however sources said that little or no specific details emerged in relation to the broadcaster’s cost-savings proposals.

Further meetings between staff and unions are expected to take place in the coming days.

Union sources had indicated, for example, that they wanted management to spell out precisely what was being sought as part of “work practice changes”.

Unions are totally opposed to pay cuts for staff and the introduction of any form of compulsory redundancies, and have not ruled out industrial action.

Separately Ms Forbes is expected to meet staff in smaller groups over the coming days.

Senior RTÉ executives were heckled by staff at a wider “town hall-style” briefing on the proposals.