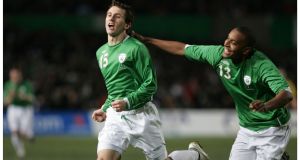 Former colleagues of Liam Miller, pictured here scoring for the Republic of Ireland against Sweden in 2006, have welcome the GAA’s decision to allow his tribute match go ahead in Páirc Uí Chaoimh. Photograph: Alan Betson

Holding the Liam Miller tribute match in Páirc Uí Chaoimh will show his children how well regarded he was as a sportsman, according to a close friend of the former Republic of Ireland player.

Former Arsenal player Graham Barrett, who played with Miller at underage and senior level for the Republic of Ireland and was best man at his wedding, said he was delighted the game was going ahead at Páirc Uí Chaoimh.

“I know Páirc Uí Chaoimh is a brilliant stadium and I think it’s really special that the game is taking place in Cork because it’s a real Cork event and I remember when I was growing up being down here with Liam and his parents, Billy and Bridie, and how proud he was of being from Cork.

“I think it will be a really special day for Liam’s family and particularly his kids, Kory, Leo and Belle, for them to see and understand what their dad did when he played and how he lived his life and how respected he was as a footballer and I just hope there’s a huge turnout on the day for them.”

Graham, who is on the organising committee along with developer Michael O’Flynn and tax partner Ciarán Medlar, said being involved in organising the benefit game was helping him cope with the loss of his close friend, who died in February from cancer.

“Liam was the best person you could ever meet - he was kind and selfless. I first met him in France when we were both playing for Ireland at u-15 level but I really got to know him when we roomed together at the U-16 Championships in Scotland when we won that tournament.

“We became close friends from then on and we were around a lot together when our kids were born around the same time. I’m still grieving for him but from a selfish point of view, concentrating on organising the benefit game and looking forward to it is probably helpful for me.”

Meanwhile Cork City FC manager John Caulfield, who is also involved in organising the match, urged all Cork City fans to support the benefit game and he paid tribute to the GAA for making it available for the once-off charity event.

“I got to know Liam when he played with us three years ago - he was a lovely person - humble and he never gloated. In spite of the heights he got to with Manchester United and Ireland, he would never speak about it unless you asked him and even then he was very shy.

“Passing away at the age of just 36 is very sad and from a Cork City point of view, we are just delighted to involved and help out in any way we can because he played with us and that’s why I would appeal to all Cork City fans to show their support by going along to the game.”

Meanwhile, Michael O’Flynn revealed Liam Miller’s former teammate at Manchester United and manager at Sunderland, Roy Keane, was delighted to learn at the weekend that the GAA were opening Páirc Uí Chaoimh for the event.

“Roy Keane was delighted that he has now the opportunity to play in the Park, as we call it, and he is giving huge credit, as everybody is, to the GAA given the difficult position they were in and how they found a way to give us the stadium rent free so it’s a win-win for everyone.”

Keane will manage and play in a Manchester United Legends XI, featuring Ryan Giggs, Denis Irwin, Jaap Stam, Paul Scholes and Rio Ferdinand among others against a Glasgow Celtic/Republic of Ireland side managed by Martin O’Neill and featuring Robbie Keane, Damian Duff and Kevin Kilbane.

Tickets for the game will go on sale via ticket.ie on August 13th and will be variously priced ranging from €10 concession terrace tickets for OAPs and students to €90 premium level tickets in the South Stand at the 45,000 capacity GAA stadium.