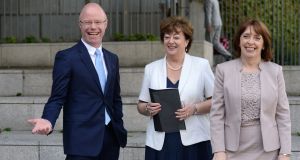 The Social Democrats today have confirmed that a former Fianna Fáil activist is to run for the party in Cork East in the next general election.

Ken Curtin, who led Fianna Fáil’s same-sex marriage referendum campaign in Cork, is to run for the newly-formed party in the four-seat constituency.

Mr Curtin, who quit Fianna Fáil in May, citing the party’s lukewarm support for the same-sex marriage referendum, said he was looking forward to standing for the Social Democrats.

“I’m delighted with the confidence the leadership of Social Democrats have shown in me when asking me to be their candidate,” said Mr Curtin, from Cobh.

“It is an honour and a privilege to be involved with this party in its infancy as its core values so much mirror my own,” he said.

Mr Curtin said that he believed Ireland needed a new type of politics as it approached the centenary of 1916 and the Social Democrats offered people a new vision.

“We’ve a choice between a continuation of more of the same or a new type of politics, based on a vision of open government and the type of public services we so badly need.

“The Social Democrats, under the leadership of Stephen Donnelly, Catherine Murphy and Róisín Shortall, can deliver on that vision, while maintaining a strong pro-enterprise economy.”

Meanwhile, Independent Cllr Noel McCarthy, formerly of Labour, confirmed that he will be running in the constituency in the next general election but has yet to decide the banner he will run under.

“I will be running but I have made no formal decision yet on whether it will be as an Independent or for a political party,” Mr McCarthy told The Irish Times.

“Discussions are ongoing with a party - I’ve made no secret of that, but I have yet to make a formal decision.

“ I will be running in Cork East one way or another,” he said.