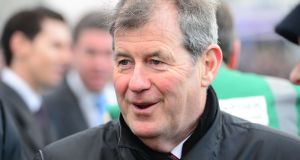 Among the high-profile objectors to the Irish Cement plans are the businessman JP McManus. Photograph: Dara Mac Dónaill/The Irish Times

The Environmental Protection Agency (EPA) has announced four days of oral hearings into Irish Cement’s controversial €10 million plans to burn waste as an energy source in its cement production process.

Irish Cement says it is looking to burn tyres and other waste materials as an alternative to fossil fuels at its plant in Mungret in Limerick which produces 2.8 million tonnes of cement every year.

The company says the process is environmentally cleaner than fossil fuels, but more than 5,000 objections to its plans have been submitted to the EPA.

Protesters say the byproducts of Irish Cement’s process will release harmful toxins into the air. Irish Cement has denied there is any threat to public health from its plans, and the plant will not generate any toxic waste.

The EPA granted a provisional licence to Irish Cement to burn waste in September of last year.

The licence being proposed for the plant provides for the acceptance of non-hazardous waste materials to be used as alternative fuels and raw materials, up to a maximum of 90,000 tonnes per annum.

The agency said it was satisfied that the emissions from the installation “when operated in accordance with the conditions of the proposed licence will meet all required environmental protection standards and will not endanger human health or harm the environment in the vicinity of the installation or over a wider area”.

The proposed licence contains more than 100 individual conditions relating to the environmental management, operation, control and monitoring of the installation.

However, it has not been enough to placate locals who believe the plans will have a detrimental impact on their health.

An oral hearing in May is expected to last four days and will be chaired by EPA senior inspector Patrick Byrne.

On completion of the oral hearing, the chairman will submit a report on the hearing to the board of the EPA with a recommendation to grant, potentially with amended conditions, or refuse the licence.

The board of the EPA must consider the report and the recommendations before making its final decision.