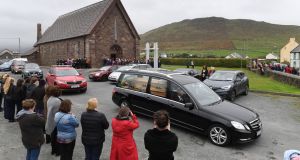 Emma Mhic Mhathúna was an inspiration, not just to those who knew her personally, but to those who were moved by her courageous pursuit of justice and truth when she knew she was dying, mourners at her funeral Mass heard on Tuesday.

Ms Mhic Mhathúna, one of the 221 women affected by the CervicalCheck controversy, died at the age of 37 on Sunday. She had been diagnosed with terminal cancer after two misread smear tests in 2010 and 2013.

On Wednesday she will make her final statement when her cortege leaves the Pro-Cathedral in Dublin after a final service. Before heading for burial in Maynooth, it will stop first at the Dáil, then at Government Buildings before heading on to the Department of Health’s new headquarters on Baggot Street.

Finally, the cortege will travel to Chesterfield Avenue in Phoenix Park, where it will stop briefly – on her instructions – outside Áras an Uachtaráin in a tribute to President Michael D Higgins “and especially his wife, Sabina” for being there when “she was at her lowest” .

The decision to stop at Government Buildings, the Dáil and the Department of Health is not to lay “blame at their door”, but rather to hold up a mirror so that all may ask themselves if they could do better in future to help other women affected by the screening controversy, sources close to the family said.

Addressing mourners in her adopted home of Baile na nGall in the Gaeltacht of Corca Dhuibhne, Co Kerry, on Tuesday, An tAthair Eoghan Ó Cadhla said her courage as she battled terminal illness had touched many.

“Emma was a remarkable lady who inspired us with her courage, her grace, her faith, her dignity and her resilience and we remember in particular her love for her children – she was selfless in that every thing she did, she did for her children and for other people who were suffering,” he said.

“Today as we celebrate Emma’s life, we remember all the people who have been struck by the cervical cancer scandal, but in particular the women and their families who are suffering at the moment and for whom Emma was a huge inspiration through her tireless search for the truth.”

Scores of mourners packed into the tiny 19th-century sandstone Séipéal na Carraige in Baile na nGall for the Mass for the mother of five children, Natasha (15), Séamus (11), Mario (10), Oisín (6) and Donnacha (2).

Ms Mhic Mhathúna had given an emotional interview last May on RTÉ’s Morning Ireland where she spoke about dying and what it would mean for her children, and about how she feared that Donnacha might not even remember her.

Natasha carried Donnacha on her hip as they followed their mother’s coffin into the church,and Donnacha later sat on the coffin as his four siblings wheeled her remains from the church.

The funeral Mass was a celebration of a young woman whose exuberance and brio quickly endeared her to the close-knit Gaeltacht community where she moved just 18 months ago.

Speaking as Gaeilge, in keeping with Ms Mhic Mhathúna’s wishes, An tAth Ó Cadhla recalled how she immersed herself in the life of Baile na nGall, savouring its music and culture and becoming a regular massgoer at Séipéal na Carraige .

This immersion in the life of Corca Dhuibhne was reflected from the opening lament played by piper Eoghan Duignan, harpist Proinsias Ó Cathasaigh and guitarist Gerry O’Beirne through to the closing hymn, Beir mo Dhúthracht, sung by Pauline Scanlon and Éilís Kennedy of Lumiere.

Ms Mhic Mhathúna’s friend Sláine Ní Chathalláin read A Time for Everything from the Book of Ecclesiastes, which includes lines about “a time to be born, a time to die”, before Mario read from a letter of St Paul to Timothy.

The offertory gifts also reflected Ms Mhic Mhathúna’s love of local life, and included a jersey from the local GAA club, An Ghaeltacht, a family photograph taken on Wine Strand, her Bible and rosary beads and one of five busts of herself she commissioned for her children as a way to remember her.

Many of the mourners wore red in solidarity with Ms Mhic Mhathúna and the other women affected by the CervicalCheck controversy.

Classmates of Ms Mhic Mhathúna’s children from Scoil Mhaolcheadair and Pobalscoil Chorca Dhuibhne lined up to form a guard of honour at its end.

Locals extended their sympathies to Ms Mhic Mhathúna’s father Peter as he prepared to bring his daughter’s remains to Dublin for Wednesday’s service in St Mary’s Pro-Cathedral, before burial in Laraghbryan Cemetery in Maynooth, Co Kildare, beside her late mother, Annette.