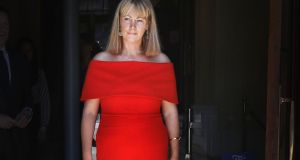 Cervical cancer campaigner Emma Mhic Mhathúna is to make one final gesture to highlight the need for accountability when her funeral cortege pauses as it passes by some of the state institutions and agencies involved in the controversy.

In a statement issued on Tuesday, Ms Mhic Mhathúna’s family said she had requested her cortege would pass by Dáil Éireann, Government Buildings on Merrion Street and the Department of Health on Baggot Street on Wednesday after her funeral Mass at the Pro-Cathedral in Dublin.

“The purpose of this route is not to protest. It is a final and departing effort to encourage those within to hold a mirror up to the organisations and agencies that they preside over politically and practically,” said her family in the statement released after her funeral Mass in Baile na nGall.

Ms Mhic Mhathúna’s family said the decision to pass and pause by the various institutions was also “a request to the respective organisations and agencies to commit to ensure that Emma’s tragic situation will never happen to another Irish mother or Irish woman again”.

“Whilst Emma was at odds with institutions and the agencies her decision to pass by them should not be interpreted as a personal criticism of any one individual but rather the institutions within,” the family stressed in their statement.

“If people wish to pay their respects to Emma we hope that they do so as a mark of recognition of the unquestionable and valuable contribution that she has undoubtedly made to the future health of the women of Ireland for generations to come.”

Ms Mhic Mhathúna’s family also said her funeral cortege will pass by Áras an Uachtaráin as “a mark of her personal appreciation to President Michael D Higgins” who visited her during the summer at her home in Baile na nGall and to thank him for his support.

Ms Mhic Mhathúna, a 37-year-old mother of five died on Sunday from cancer after she was twice given clear smear tests in 2010 and 2013 only to discover in 2017 that the results had been misread.

Ms Mhic Mhathúna, who is survived by her children, Natasha (15), Seamus (11), Mario (10), Oisín (6) and Donnacha (2) and her father, Peter, will be laid to rest on Wednesday beside her late mother, Annette in Laraghbryan cemetery in Maynooth, Co Kildare.