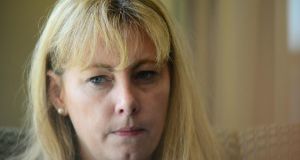 Emma Mhic Mhathúna: “Nobody knows what they are doing, it is not co-ordinated and what is going to happen is everyone is going to get frustrated.” Photograph: Bryan O’Brien

Emma Mhic Mhathúna, one of the women affected by the CervicalCheck controversy, has criticised the Government’s “slow” response to provide financial and other supports promised to affected patients.

The Co Kerry-based mother of five has expressed frustration at the failure to make available the package of services that the Government promised the women more than two weeks ago.

Ms Mhic Mhathúna told The Irish Times that she has been struggling financially and with the logistics of travelling to appointments in Dublin from her home in Ballydavid on the Dingle peninsula.

She is one of the 209 women with cervical cancer who were found to have received incorrect smear tests during a clinical audit of past tests by the CervicalCheck screening programme after their cancer diagnoses.

The 37 year old is among 162 of those who were only told about the incorrect tests after Limerick woman Vicky Phelan settled her court case against a US laboratory used by the CervicalCheck for the testing.

Ms Mhic Mhathúna was diagnosed with cervical cancer in 2016 and was informed last month that a 2013 smear test that indicated no abnormalities was later found to be incorrect.

On May 11th, the Government announced a package of services for the women including medical cards, counselling and psychology supports, reimbursement of medicines and treatments, childcare and travel costs.

Other women caught up in the controversy and relatives of some of the 18 women among the 209 who have died have also complained on a private online social media group about the delay in supports being made available, the lack of a co-ordinated response to the controversy and being drip-fed information.

A spokeswoman for the Health Service Executive said the process to issue the package of supports to the women begins immediately once they have met a HSE executive.

Nobody knows what they are doing, it is not co-ordinated and what is going to happen is, everyone is going to get frustrated

Ms Mhic Mhathúna was scheduled to meet a HSE executive at her home on Monday evening.

Speaking after meeting the HSE representative, Ms Mhic Mhathúna said the HSE was planning to pay for medical and travel expenses directly and to reimburse the women for childcare and other costs but that it would take weeks to set up the system.

Ahead of that meeting, she criticised the slow response and complained about having to travel to Dublin again this week for a gynaecological appointment as part of her High Court case against the US laboratory that carried out her test.

“Nobody knows what they are doing, it is not co-ordinated and what is going to happen is, everyone is going to get frustrated,” she said.

Last week she said she had to take her children out of school, drive to Kilkenny where she had her children looked after and then travel on to Dublin the next day, repeating the journey again on her return to Kerry.

The travels have taken a toll financially and physically on the terminally ill woman, she said.

“Even if it was a reimbursed scheme, I am not capable of doing these long drives; it is actually dangerous; fatigue is the biggest symptom; it’s the most difficult to manage,” she said.

“You can’t be dying and driving at the same time, not with children in the car.”

Ms Mhic Mhathúna called on the Government to assign someone to co-ordinate issuing the package of supports to the women.

“I understand the Government has been focusing on the referendum but they can assign somebody to do the work for them,” she said.