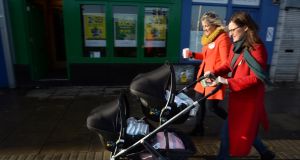 The timing of the general election could hardly be less favourable for Fianna Fáil’s Dublin South Central candidate Catherine Ardagh.

The Senator gave birth to twins Darragh Óg and Seán on December 29th after what she describes as a “serious operation” in the Coombe Hospital.

Taoiseach Leo Varadkar called the election on January 14th, when the twins were less than three weeks old. The boys recently made their first public outing in a photocall with Fianna Fáil leader Michéal Martin as he toured the sprawling urban constituency.

On Sunday the twins sit in their car seats, dummies in mouth, beside teddy bears dressed in Fianna Fáil colours in the offices of Ardagh’s company, Ardagh McCabe Solicitors in Crumlin, which is doubling as a campaign headquarters.

When Ardagh found out she was pregnant last April, she anticipated that an election would occur some time in April or May of this year - plenty of time to make childcare arrangements. Events, though, intervened and the Taoiseach called an election for a time not of his choosing, and certainly not of Ardagh’s.

“Absolutely delighted,” she says ironically when asked for her view on the February 8th polling date. “You have to deal with whatever comes your way.”

To add to the frenetic atmosphere, Ardagh’s husband Darragh McShea is Fianna Fáil’s assistant general secretary. “We are likes ships in the night,” she says, adding that the boy’s grandmothers have been a big help.

Ardagh says people have been supportive. One exception is independent candidate Alan Kerrigan. Nobody in political circles had heard of Kerrigan, who claims to have been born in the constituency and to have held senior positions in some tech firms. He has had plenty to say to fellow candidates in Dublin South Central, particularly Ardagh, who he claimed the electorate deserved an answer from about any plans she had to take maternity leave after the election.

His approach did not go down well on social media, but it’s not a forum Ardagh takes seriously. “I know nothing about him whatsoever. I had never heard of him. It’s kind of bizarre,” she says.

Ardagh says she plans to put the twins into the creche in Leinster House that’s “if I get elected and if I can get a place. It’s very hard to get into I believe”.

And if she doesn’t get elected?

“I have to come back to work anyway because I’m self-employed. I never really thought about maternity leave,” she says. “One way or the other, I’ll be going back to work. Sorry Alan to burst your bubble.”

Ardagh says that if she is elected to the Dáil, she will campaign for a State-funded crèche system so mothers are able to return to work after their maternity leave ends. It’s an ambitious plan that is not in Fianna Fáil’s manifesto.

Ardagh came agonisingly close in 2016 to winning the Dáil seat held by her father, Seán Ardagh, between 2002 and 2011. The count went on for four days and she finally lost by 35 votes to People Before Profit’s Bríd Smith.

Family matters soon put her loss in perspective as her father was terminally ill from Non-Hodgkin’s lymphoma and died three months after the election.

“We could tell that he wasn’t in great form, that it was rearing its head again. In previous times when there was a count on, he would be scrutinising every vote. He just didn’t have the energy for it.”

She was then elected to the Seanad’s Industrial and Commercial Panel and was appointed Fianna Fáil’s leader in the Upper House. It was a bitter sweet time. “He didn’t come into the Seanad, but he was aware and compos mentis when I was elected. He was in a hospice at the time.”

Ardagh is standing in a constituency dubbed the ‘People’s Republic of Dublin South-Central’ due to its left-wing tendencies. Three of its four outgoing TDs are from the left - Sinn Féin’s Aengus Ó Snodaigh, Independent Joan Collins and Smith. The seat of Fine Gael Minister of State Catherine Byrne is regarded as vulnerable and the Green Party’s Cllr Patrick O’Connell is seen as one to watch in the constituency, which has a large transitory population and a lot of residential turnover.

Only Ó Snodaigh’s seat is regarded as safe, and Ardagh should have a better than average chance of being elected based on the poll numbers.

Housing is the big issue in the constituency, she says, and this is borne out on the doorsteps in Perrystown. Even in this settled suburb, those with homes fret for those who are without. One woman says she has two children abroad and wonders will they get housing if they return. Another, a teacher, says it is hard to get younger colleagues into her school.

The biggest housing issue in the constituency is the redevelopment of St Michael’s Estate in Inchicore, a flagship programme for the outgoing Government’s “cost rental” scheme. The plan was to build 420 homes and rent them at affordable prices. This provoked an unseemly spat between the Minister for Housing Eoghan Murphy and Byrne, who said the proposal would bring a transitory population to the area. The project is yet to go ahead.

Ardagh says she will support the St Michael’s proposal if elected.

“As politicians, if we really want to sort the housing crisis, we are going to have to let nimbyism slide. If you look at every constituency you will find examples of sitting TDs or senators coming out against certain housing developments. We need to be generous in allowing social and housing developments be constructed across the city.”

In that spirit, she says there is no appetite on the doorstep for tax cuts and the electorate are prioritising spending on public services.

“I think people are a lot less greedy than you give them credit for. We have everything. People aren’t as flash these days which is very welcome.”