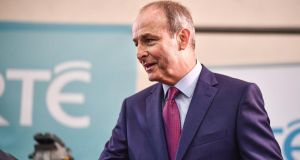 Micheál Martin at the count for Cork South-Central. One long-serving TD said Martin was likely to know his position was under pressure. Photograph: Jeff J Mitchell/Getty Images

As a poor election got substantially worse for Fianna Fáil on the second day of counting, the mood within the party darkened.

TDs emerged from count centres to the news that not only had some candidates failed to win a seat but that outgoing Deputies were losing theirs too.

The roll call of those who lost kept getting longer. Early casualties such as Eugene Murphy and Lisa Chambers were joined by another high profile name in Timmy Dooley, whose loss in Clare was offset by his running mate Cathal Crowe.

Other sitting TDs lost their seats but were replaced by running mates. These included Kevin O’Keeffe losing the Fianna Fáil seat in Cork East to James O’Connor; Margaret Murphy O’Mahony losing her Cork South-West seat to Christopher O’Sullivan; and Bobby Aylward being replaced by Jennifer Murnane O’Connor in Carlow-Kilkenny.

At the dissolution of the 32nd Dáil, Fianna Fáil had 46 TDs, including Ceann Comhairle Seán Ó Fearghaíl. As of Monday night it was struggling to hold 38.

At the end of the first day of the count Fianna Fáilers knew their results were disappointing but consoled themselves with the belief that they would be the largest party in the Dáil by a comfortable margin. That belief was shattered by Monday afternoon.

“There was hope before lunch,” said one TD. “Despair after.”

By Monday evening it was clear that Micheál Martin’s party would barely have its nose ahead of Sinn Féin and Fine Gael. Its candidates could not attract transfers as counts wore on, and some who were elected – such as Jackie Cahill in Tipperary – scraped in for the last seat.

If it wanted to enter government with either Mary Lou McDonald or Leo Varadkar it would be a partnership of equals instead of the usual senior party-junior party relationship.

“It is f***ing desperate,” said one TD with evident horror.

The public line taken by Michael McGrath, Barry Cowen, Dara Calleary, Jim O’Callaghan and others – that McDonald should be given the opportunity to form a government – was being maintained in private conversations.

“Let them off for a specified period of time,” said one party TD, indicating that McDonald could try to form a minority administration if she wanted.

Enthusiasm for coalition with either of the other two larger parties had dropped substantially by Monday evening, and a hardening view that Fianna Fáil should go into opposition had taken over.

At count centres or in pubs around them, TDs spoke to their election teams about the way ahead for the party.

The prospect of any form of arrangement with Fine Gael was dismissed out of hand by some, while it was suggested that coalition with Sinn Féin would lead to an extremely divisive debate for the party.

Coalescing with Fine Gael, although not ruled out by senior TDs such as McGrath, is rejected in the strongest terms by many. Confidence and supply was the weapon Sinn Féin used to attack Fianna Fáil, and for many any further co-operation between the Civil War parties would be electoral suicide.

“Not a notion,” said one frontbencher. “No way in the world,” said another.

Yet another was incredulous that McGrath was even considering Fine Gael as a viable option.

On the issue of the party leadership, some TDs declined to discuss the matter either on or off the record. Some supported their leader, but the reticence of others indicated confidence in Micheál Martin has taken a battering.

One long-serving TD said Martin is likely to know his position is under pressure. “He knows,” the TD said. “Why would he stay on? He has been there three terms.”

In contrast, others were supportive. “I am 150 per cent behind him,” said a senior TD.

Galway East TD Anne Rabbitte said she expected the parliamentary party to meet in the coming days to discuss the way ahead. “Fianna Fáil is a party with options. We need to discuss all of the options.”

But none of the options are easy for Martin. To save his leadership he will need to enter government with either Sinn Féin or Fine Gael. The first option has the potential to sharply divide Fianna Fáil, and the latter, according to TDs, would be rejected by the parliamentary party and rank-and-file membership.

The third option, and the one finding increasing favour in the party, is returning to full-throated opposition. The problem for Martin is this would likely require him to stand aside as leader.