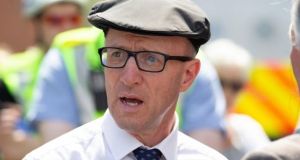 Both Michael Healy-Rae and his brother Danny are likely to hold their seats. File photograph: Tom Honan

A real scrap is brewing in Kerry over the seat being vacated by Sinn Féin’s Martin Ferris, with that party further destabilised by his daughter Toiréasa’s decision in June of last year not to contest the election on health grounds. A Tralee solicitor and county councillor, Pa Daly, was selected in October, but he lacks name recognition, and the party is coming off an unsuccessful local election campaign. Fianna Fáil clearly had the scent of blood in the water, adding a third candidate, Cllr Norma Foley, last month. She is the second young, articulate female candidate on the Fianna Fáil ticket, alongside Waterville-based Norma Moriarty. Clearly, the party is targeting a second seat, but its strategy is not without risk.

Tralee-based Foley will hope to siphon off soft Sinn Féin votes and also target Labour votes from the old Spring camp – that party is yet to select a candidate. This will bolster her own already strong vote in Tralee, which saw her take 2,106 first-preference votes to be elected on the first count. She and sitting TD John Brassil share a geographic base, raising the possibility that the sitting Fianna Fáil deputy could be squeezed out by the two Normas, if the Sinn Féin seat is to fall.

Fine Gael’s ticket is a more straightforward geographic split between junior minister Brendan Griffin in south Kerry and Cllr Mike Kennelly in the north of the county. Griffin is likely to hold his seat, but his running mate will find it harder to break through.

At the start of the campaign, there weren’t any cracks evident in the Healy-Rae political machinery. Three councillors – Johnny, Jackie Jnr and Maura – were returned in the local elections, polling a combined first preference of almost 8,800 votes across a considerable geography. In this constituency, rural and local issues such as isolation, depopulation and farming will matter, and the Healy-Raes have an ability to speak to these concerns. Both Michael and Danny are likely to hold their seats.

The absence of Toiréasa Ferris from the ballot paper, combined with a crowded ticket based in and around Tralee, had been headwinds for Daly. However, Sinn Féin’s buoyancy and the now-confirmed absence of a Labour candidate to mop up the traditional Spring vote in Tralee means there is no need to change our prediction that Daly will retain Ferris’s seat. Indeed, it now seems more likely than at the start of the campaign.

Other declared candidates in the constituency include Brian Finucane (People Before Profit), Cleo Murphy (Green Party) and Sonny Foran (Aontú).