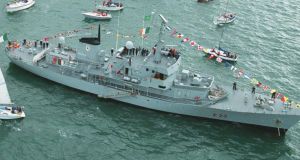 One of four Irish Naval Services ships to be built at Verolme Cork Dockyard, the LÉ ‘Aisling’ was involved in significant moments in the Naval Service’s history. File photograph: Joe St Leger

A former Naval Service ship involved in some of the most significant episodes in recent Irish maritime history has sold at auction for €110,000 to a Dutch buyer who plans to resell it on the international market.

Dutch ship buyer, Dick Van Der Kamp, only inspected the LÉ Aisling at the Naval Base at Haulbowline on Thursday morning before securing it at auction at Carrigaline Court Hotel.

Four years ago, the LÉ Aisling’s sister ship, the LÉ Emer sold for €320,000 to a Nigerian businessman but Mr Van Der Kamp said that it was too early to say whether he had got a bargain.

“The market is very depressed at the moment so I don’t know whether I have got a bargain yet – it depends on the interest she generates – she could be used as an offshore vessel even though there are a lot of these ships available at the moment or she has potential to be converted into a yacht.”

Mr Van Der Kamp said that LÉ Aisling had been well maintained by the Naval Service and Verolme Cork Dockyard where she was built in 1980 had a good building record. However, the fact remained she was a 36-year-old vessel and not as attractive for use in the oil exploration industry as newer ships.

Auctioneer, Dominic Daly, who sold both the LÉ Emer in 2003 and the LÉ Deirdre which fetched £200,000IR in 2001, said he was disappointed with the price that the LÉ Aisling went for but it reflected current market conditions for such ships.

“There wasn’t the same level of interest or viewings in the lead in that I had hoped for but that reflects the current market – the price of oil is so low that there isn’t that much offshore exploration going on plus there’s a surplus of offshore vessels all around the world – I did my best but it is disappointing.”

One of four Irish Naval Services ships to be built at Verolme Cork Dockyard, the LÉ Aisling was involved in significant moments in the Naval Service’s history including the apprehension of the Marita Ann with guns for the IRA in 1984.

A year later, the LÉ Aisling was one of the first ships to reach the scene of the Air India disaster some 160km off the southwest coast when all 329 passengers and crew on board the plane were killed in a bomb attack.

The LÉ Aisling was replaced by the LÉ William Butler Yeats and the Naval Service is due to take possession of another new ship, the LÉ George Bernard Shaw next summer from ship builders, Babcock Appledore in Devon in the UK at a cost of €156 million plus VAT.