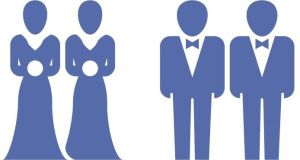 The Northern Assembly for the first time has voted by a narrow majority in favour of same-sex marriage. The DUP, however, used a blocking mechanism to ensure that the legislation will not be changed.

Proponents of same-sex marriage hailed the vote as a “moral victory”.

This was the fifth time the Assembly has voted on such motions in the past three years. All previous votes were lost by simple majority, but this time the vote was 53 in favour of changing the legislation with 52 opposed.

The Ulster Unionist Party leader Mike Nesbitt, who previously said he opposed same-sex marriage, abstained. At his recent annual party conference he said that “those of us who cannot bring ourselves to support same sex marriage. are on the wrong side of history”.

Despite the single vote majority, the DUP ensured the motion could not become operative by lodging a petition of concern.

This is a vetoing mechanism which meant that even with the simple majority favouring same-sex marriage in Northern Ireland, the motion was still lost.

During the 90-minute debate, Sinn Féin Assembly member Phil Flanagan criticised the DUP for lodging a petition of concern and added that a majority in favour of the motion would constitute a “moral victory”. After the vote, Colum Eastwood of the SDLP who made the opening speech in favour of the motion also described the outcome as a “moral victory”.

Last April a Sinn Féin motion was defeated by a simple majority of 49 votes to 47.

One of the key votes that swung the simple majority was that of Trevor Lunn, the Alliance MLA for Lagan Valley. Previously he voted against same-sex marriage while in last April’s vote he abstained. This time he voted in favour.

Mr Lunn said had travelled on “a journey” to arrive at his position. “Some journeys take longer to get there,” he said. “I am now where I am. I am satisfied with the position I am now taking,” he added. “Marriage is the union of two people who love each other – that’s it.”

Sinn Féin and the SDLP jointly proposed the motion calling on the Northern Executive “to table legislation to allow for same-sex marriage”.

The SDLP North Belfast MLA Alban Maginness, who is known to be opposed to same-sex marriage, was not in the chamber and did not vote.

Lord (Maurice) Morrow of the DUP criticised the use of the term “equal marriage” which he said was “ultimately completely vacuous”.

UUP Assembly member Danny Kennedy said that redefining marriage would have consequences for society. He opposed same-sex marriage because of his Christian beliefs and because he believed it was contrary to Holy Scripture. He said that he did not disparage the LGBT community and that his holding such views should not lead to him being labelled homophobic. “That would offend and abhor me,” he said.

Shortly ahead of the vote, Catholic bishops in Northern Ireland issued an open letter to Northern Assembly members urging them to vote no. The six bishops led by primate Archbishop Eamon Martin said those who voted in favour of the motion had “no way of knowing what the full consequences of such a vote will be”.

“The truth about marriage derives from its intrinsic nature as a relationship based on the complementarity of a man and woman and the unique capacity of this relationship alone to generate new life. This truth does not change with the shifting tides of historical custom or popular opinion,” they added.