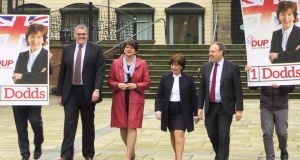 Northern Ireland’s pro-Brexit Democratic Unionist Party (DUP) is running ads on Facebook to raise money in England only as part of a new fundraising drive on social media.

The party’s “Support Brexit – Support the DUP” ads are being shown mostly to people over the age of 55 – an age group that voted in the majority for Brexit - and only in England where the party has no candidates.

Facebook data on the ad, which features photographs of DUP leader Arlene Foster and deputy leader Nigel Dodds, says it was being shown only to people living in England.

Some 37 per cent of the people being shown the ad were aged 65 years or older and a further 25 per cent are aged between 55 and 64, according to the data on the ad.

The ad had been viewed between 5,000 and 10,000 times since it began running on Tuesday, just weeks ahead of European and local elections.

Asked why the DUP was running the ad in England where the party had no candidates, a spokesman said the DUP wants to see the UK’s vote in the 2016 referendum, to leave the EU, implemented.

“The DUP wants to see a deal as we exit the EU which respects the referendum result and works for every part of the United Kingdom, ” he said.

“People in England, Scotland and Wales as well as Northern Ireland support our position. We welcome such support.”

The spokesman said that the party was not targeting any particular age group with the ad.

The People’s Vote campaign, which is pushing for a public vote on the final Brexit deal, believes the ad shows the DUP are turning their focus to England because of the anti-Brexit feeling in Northern Ireland.

“The DUP have plainly realised that opinion in Northern Ireland has turned sharply against Brexit and so they cannot afford to be seen promoting it with local and European elections approaching,” said a source with the campaign.

“Maybe their funders in the business community have bailed on them too.”