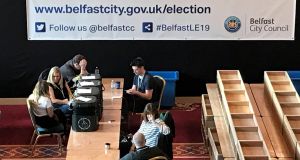 Counting under way in Belfast after voters went to the polls in local elections. Photograph: Rebecca Black/PA

While there are some changes to the political pattern, the dominant picture remains the same as counting continues in the local elections in Northern Ireland.

The performance of Alliance and the election of the DUP’s first openly gay candidate may have grabbed the headlines, but the future still is mainly Orange and Green.

The quirks of the transfer voting system could yet cause some surprises when counting concludes sometime on Saturday, but as of late on Friday night the DUP and Sinn Féin were very safely in pole political position in the North.

The Alliance and Green Party however were making advances in the election to the North’s 11 councils, while the Ulster Unionist Party appeared to be under pressure and dropping a number of seats.

The SDLP appeared to be holding its own and, much to the satisfaction of its leader Colum Eastwood, a Derry native, was making some dents in Foyle to the Sinn Féin vote.

People Before Profit also appeared to be doing well from a low base while former Sinn Féin TD Peadar Tóibín’s new party, Aontú, which campaigned on an anti-abortion platform among other issues, was poised to take a seat in Derry, although it was unclear whether its vote in other council areas would translate into additional seats.

Ahead of the election, people wondered would voters send a clear message as they appeared to have done at the funeral of New IRA murder victim Lyra McKee – that they wanted the two main parties to work together to restore the powersharing institutions that crashed in January 2017.

With the Conservatives and Labour parties suffering significant losses in the local elections in England due, it is believed, to the Brexit deadlock, people also wondered would the DUP and Sinn Féin take a similar hit as a result of the Stormont deadlock.

But instead, as is generally the case, the constitutional nationalist versus unionist factor outweighed the undoubted public sentiment for political progress.

The question now is how the DUP and Sinn Féin will perform relative to each other. In the 2014 locals Sinn Féin topped the poll with 153,000 votes, with the DUP not too far behind on 145,000 votes. Transfers and vote management however resulted in the DUP taking 130 seats to Sinn Féin’s 105.

How this specific contest unfolds will not become clearer until later on Saturday.

What seems clear though is that the two main parties won’t be under extra pressure to strike a deal in the talks called by the Irish and British governments and aimed at reinstating devolution that resume on Tuesday.

There was one straw in the wind from the results so far. Two of the big hurdles to be overcome to reach a deal are the Irish language and same sex marriage in Northern Ireland. The election of the DUP’s Alison Bennington to Newtownabbey Borough Council, despite some fundamentalist religious opposition to her candidature because she is gay, indicates that the DUP leadership should have some wriggle room if it wants to move on this issue.

The success of Alliance also throws up some intriguing questions about the European Parliament elections at the end of this month. The DUP’s Diane Dodds and Sinn Féin’s Martina Anderson appear certain to take two of the three seats but there could be a close tussle for the final seat between the UUP, the SDLP, Alliance and Traditional Unionist Voice.

Danny Kennedy is standing for the UUP after the party’s outgoing MEP Jim Nicholson called it a day following close to 30 years in Europe. This created the conditions for a tight fight between Kennedy and the respective leaders of the SDLP, Alliance and TUV who are also competing, Colum Eastwood, Naomi Long and Jim Allister.

If Long can gain on the momentum that Alliance has achieved so far in these local elections then she could make it difficult for her three male rivals for the third seat.