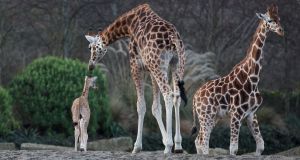 Dublin Zoo announced the birth of a giraffe calf on Thursday, marking the facility’s second new arrival in two weeks.

The giraffe was born to its mother Maeve and father Tafari in the African Savanna section of the zoo on Tuesday, February 13th.

Dublin Zoo said the calf is healthy, standing at just over six feet tall and weighing about 40kg.

“The giraffe calf is very lively and is engaging positively with the rest of the herd,” said Helen Clarke-Bennett, team leader at Dublin Zoo, in a statement.

“Mother Maeve and her calf are healthy and Maeve is doing an amazing job of looking after the new arrival. We’re very excited about this addition to the Dublin Zoo herd and to see what the rest of the year will bring.”

The calf is a Rothschild giraffe – one of the most threatened of the nine giraffe sub-species, with less than 670 remaining in the wild. Fully-grown male Rothschild giraffes can reach six metres in height and weigh more than 2,000kg.

The arrival follows the birth of a 90kg male Asian elephant calf last week. The calf was the seventh elephant born in the zoo in the last four years.