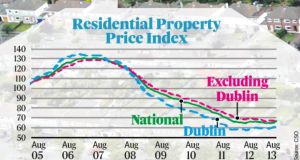 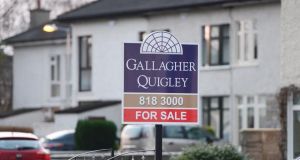 Property prices in Dublin have increased by 10.6 per cent over the last 12 months, according to new figures released by the Central Statistics Office.

In the year to August, residential property prices at a national level increased by 2.8 per cent compared to an increase of 2.3 per cent in July and a decrease of 11.8 per cent recorded in the 12 months to August 2012.

Dublin residential property prices grew by 1.9 per cent in August this year, and were 10.6 per cent higher than a year ago.

The CSO said house prices in Dublin were 51 per cent lower now than at their peak in early 2007, while apartment prices were 59 per cent lower.

The fall in the price of residential properties in the rest of Ireland is somewhat lower at 48 per cent. Overall, the national index is 49 per cent lower than its heighest level in 2007.

The price of residential properties in the rest of Ireland (i.e. excluding Dublin)rose by 0.1 per cent in August but were 2.6 per cent lower than in August 2012.

Goodbody economist Dermot O’Leary said the figures were the result of a lack of supply in the capital and were not indicative of a sustainable recovery.

“It’s a supply led squeeze in Dublin and I think price inflation of 10 per cent plus per annum is not a healthy phenomenon. I think prices are going up pretty fast but for the wrong reasons. A more sustainable recovery would be accompanied by an increase in supply in the market as well.”

He added that it was very much a “Dublin versus non-Dublin split”, saying “there’s still relatively high vacancy in certain parts of the country, particularly the border counties and the west”.