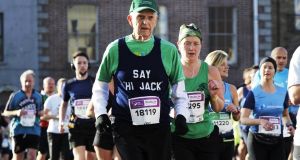 Jack Gallagher, from Winter Park in Florida, travelled for the Dublin City Marathon last October. He has still not got his prize.

One of the oldest athletes to compete in last year’s Dublin City Marathon is baffled and disappointed that his prize money for finishing first in the over-80s category has vanished.

Jack Gallagher from Winter Park in Florida travelled to Dublin for the event last October and was delighted when he finished first in the 80-85-year-old category in a time of six hours, 59 minutes and 28 seconds.

The result earned him a medal and prize money of €125. However his marathon journey was only just beginning.

“Today, 103 days later, I have yet to receive my award, despite numerous email exchanges in the ensuing months,” he wrote in a letter to The Irish Times. “This is astounding and raises all sorts of questions about what is going on,” he said before expressing the hope someone somewhere would be “able to show me the money”.

He criticised “the list of excuses by race officials” including being told there was a “problem with the German bank handling wire transfer to my bank here in the United States”.

Finally he was told US dollars had been bought and sent his way via An Post. “That supposedly took place on February 2nd. Two weeks have passed since then and I still have no idea where the money is or whether it actually was sent,” he wrote.

“The whole scene has an unreal quality about it. After a wonderful race in October, it is a bitter pill to swallow to be denied my rightful award,” he concluded.

Eugene Coppinger, the deputy director of the Dublin City Marathon said he could “fully understand his frustration as he has been waiting a long time”.

He explained there were more than 80 different cash prizes to be dispensed after the race including small awards to men and women over the age of 40 who were competing as “Masters”.

But before a single cent could be sent to anyone, race organisers needed to get the green light from doping authorities. The doping controls do not extend to men in their 80s and only the elite athletes face tests but the race organisers have a policy of not paying anyone until they can pay everyone.

That process took 30 days after which race organisers tried to send money Jack’s way via a third-party bank – as he told this newspaper. But the wire transfer proved problematic so instead the marathon organisers bought $160 and posted it via registered post at the beginning of this month. It arrived in the US 11 days ago after which it disappeared without a trace, he said.

“As I understand it, An Post is dealing with the US postal authorities. We had his full and correct address and it was sent by registered post and we have the barcodes to prove that so I cannot understand why there would be a delay.”

Mr Coppinger said that the oldest winner in last year’s race was now the only person yet to get his prize.