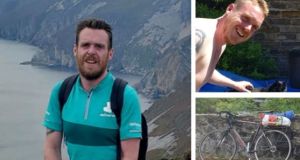 A man who had been missing from his home in Prussa Street, Dublin, has been located safe and well.

Gardaí had sought the public’s assistance in tracing the whereabouts of 35-year-old Christopher Duff, who had been missing since Wednesday.

The man’s sister, Amanda Duff, had appealed to the public on Twitter for information. “My brother Chris left his home in Stoneybatter on Wednesday morning,” she said.

“He spoke to a friend on Wednesday night and was in Wicklow cycling to Wexford intending to catch a bus back. We haven’t heard from him since that call on Wednesday evening. His phone is dead so no one can contact him. He has a lot of friends and family who are worried about him.”

In a statement on Sunday evening, the Garda said: “Christopher Duff has been located safe and well. We would like to thank the public and the media for their assistance in this matter.”