Dublin girl (3) one of youngest to appear on Irish stamp

Crumlin schoolgirl Paris Curtis unveiled An Post's new Christmas stamp on which she appears dressed as an Angel singing carols at the Mansion House when she was three. Video : Bryan O'Brien 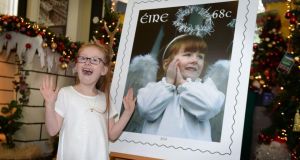 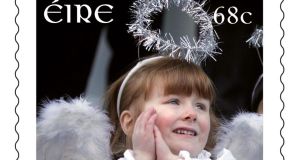 A Dublin girl, who was three-years-old at the time of the photograph, could be one of the youngest faces to appear on a stamp in Ireland.

A Dublin girl, who was three-years-old at the time of the photograph, could be one of the youngest faces to appear on a stamp in Ireland.

An Post has unveiled the new design for its 68 cent Christmas stamp at the General Post Office on Monday.

The stamp features Paris Curtis, who is now seven-years-old, from Dublin 8, as an angel singing carols outside the Mansion House Dublin.

The Marist National School in Crumlin student said she was “happy and excited” to be featured on the stamp.

Theresa Curtis, Paris’s grandmother, said the family would be sending the stamps to relatives in Australia and America.

“We never thought something like this would happen,” she said.

Paris was a student at St Joseph’s Early Care and Education Centre in Maryland when her photo was taken four years ago.

It was a year-long process of research and submission for Cabinet approval to get the stamp officiated.

This is the 28th year An Post has issued Christmas stamps, which feature scenes from Irish life.

Two other Christmas stamps featuring images from stained-glass windows by Harry Clarke are also available for individual purchase at all post offices and online.

The 68 cent self-adhesive stamps are available in booklets of 26 for €17 at all post offices and online at irishstamps.ie