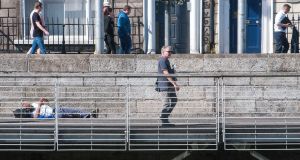 A general view of the boardwalk on the river Liffey. Photograph: Dave Meehan/The Irish Times

Dublin City Council manager Owen Keegan said the issue of anti-social behaviour on the Liffey boardwalk is a broader one than the council can handle.

Reacting to an article by Irish Times journalist Rosita Boland which documented incidents of drug dealing, drunkenness, urination and fighting, Mr Keegan said the council had no powers of enforcement to stop anti-social behaviour.

However, he stated that even gardaí are constrained in how they deal with behaviour on the boardwalk which stretches along the north bank of the Liffey from Grattan Bridge to Rosie Hackett Bridge.

“The gardaí will tell you that if they do arrest people for breaches of public order, there is no enthusiasm in the prison service, they will be let them out the same day. It’s a revolving door,” he said.

Ms Boland witnessed €50 notes changing hands for bags of white powder, a man attempting to jab a needle into his thigh and a man on a bike delivering a plastic bag of tablets to someone on a bench.

She also spoke to many people who said the boardwalk, which was supposed to be a pleasant amenity, was a place many people were now seeking to avoid.

Mr Keegan said he witnessed the same anti-social behaviour outside Dublin City Council offices every morning in Wood Quay which are across the road from the boardwalk.

“There are people injecting in public. The first thing we do every morning is send around a guy to pick up the needles,” he said.

“Developing the public realm when you have those challenges is a big issue for us.”

Mr Keegan suggested that attitudes to anti-social behaviour are coloured by perceptions of the people who are carrying out the acts.

“There are fundamental issues about whether or not we can impose any expectations about behaviour. Low level drug dealing is an offence, but it seems to be the norm.”

The boardwalk is managed by Dublin City Council. In a statement to The Irish Times, it described the boardwalk as “a new urban space in a riverside city centre location which has proved popular with tourists and citizens alike.

“It provides space for walking and resting and this experience has been further enhanced by the recent installation of new LED lighting.”

The council said the anti-social behaviour was a matter for the Garda.