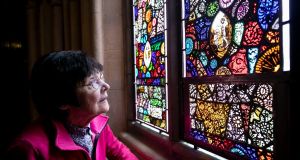 A bridge in Cabra, north Dublin has been named after one of the State’s greatest stained-glass artists. The Cabra Road Bridge in Dublin 7 has become The Harry Clarke Bridge, following requests from local residents.

Clarke’s work is displayed in the nearby St Peter’s Church in Phibsborough. He created more than 160 stained-glass windows for religious and commercial commissions throughout Ireland, England, the US and Australia. He also illustrated books for Harrap and Co in London.

The Cabra Road Residents’ Association applied to Dublin City Council’s commemorative naming committee in 2017 requesting the bridge be named after Clarke. The Lord Mayor of Dublin Nial Ring unveiled a plaque on the bridge on Saturday afternoon alongside local residents and Clarke’s granddaughters.

“It is a privilege to be here in Cabra today to unveil a plaque to Harry Clarke. It is a fitting tribute to this internationally renowned Dublin-born craftsman and I would like to thank the Cabra Road Residents’ Association and Dublin City Council for honouring the artist in this way,” he said.

Clarke was born in Dublin in 1889. His father, Joshua Clarke, ran a successful church decoration business from studios at their family home on North Frederick Street.

Clarke trained as an architectural draughtsman for a short time after leaving school, but returned to the family business to learn the craft of stained glass.

By his late teens he was studying stained glass at the Dublin Metropolitan School of Art. In 1911, he won a gold medal in the Board of Education national competition at South Kensington, London, for his window the Consecration of St Mel, Bishop of Longford, By St Patrick.

The three-light window in St Peter’s Church, entitled Apparition of the Sacred Heart, St Margaret Mary and St John Eudes (1919) is considered to be one of Clarke’s early masterpieces.

It was commissioned by the Vincentian Fathers as St Peter’s Church was home to the Archconfraternity of the Sacred Heart in Dublin.

Other notable works by Clarke in Dublin are The Eve of St Agnes, which is on public view at the Hugh Lane Gallery on Parnell Square and the stained glass windows in Bewley’s Cafe, Grafton Street.