DSPCA and gardaí at odds over horse cruelty incident 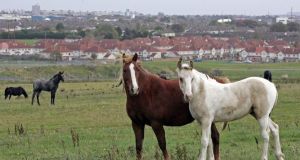 The Dublin Society for the Prevention of Cruelty to Animals (DPSCA) has insisted that the horse whose charred remains were found in Tallaght yesterday was burned alive.

The gardaí say they are satisfied from their investigations that the mare was already dead when petrol was poured on her carcass and it was burned.

However, DSPCA spokeswoman Gillian Bird said it was in “no doubt” that the animal was alive when she was set on fire.

“We have received information from eyewitnesses and people who have spoken to eyewitnesses who say this horse was alive when she was set on fire, though we do not know what state she was in,” she said.

“We have no evidence that she was not alive. We will have more information about this next week.”

The incident happened on a patch of grass off the R136 between CityWest and Tallaght in the early hours of Thursday morning.

Ms Bird has insisted the original reports that the animal was alive came from the Garda station in Tallaght and subsequent information backed that up.

She also said new information had come to light regarding the fate of the mare before she died.

She had recently weaned a foal and appeared to be sick prior to the incident, possibly suffering from mastitis.

According to reports given to the DSPCA, she was tied to a lamp post and was seen choking on the rope before being removed shortly before her death. Another report tells of seeing a number of youths pouring a bottle of vodka down the mare’s throat.

“Currently these reports are unverified but we will be following them up to complete the case file,” she added.

The DSPCA feels the claim the animal was dead prior to the incident has been given by witnesses to the gardaí in the hope that other horses will not be removed by the local authorities in response to the burning.

The incident was described by the animal charity yesterday as a “deeply sinister development” and caused widespread outrage.

A spokesman for the Garda press office said the abandoned horse was dead before its remains were set alight.

Ms Bird said they had encountered another incident of cruelty to a horse when a miniature Marabella miniature horse was rescued by a passer-by on Wednesday.

Local children in Tallaght had tied a rope around his lower jaw and lip and made him drag a wooden pallet in front of him.

The passer-by bought the pony for €100 and stopped a van driver who took the animal back to his house. The DSPCA then came and collected the Marabella horse who has bruising to his mouth but is otherwise unharmed.

In a separate incident, some 15 of the horses that were found grazing illegally in Cork have been put down.

The horses were rounded up last week by gardaí in a crackdown on unwanted animals grazing on both public and private lands. The horses belonged to members of the travelling community.

A total of 85 across four sites in the Gurranabraher, Hollyhill, Knocknaheeny and Nash’s Boreen area of Cork’s northside were impounded and kept in a secure location pending them being claimed by their owners.

Following an appeal, 30 were reclaimed by their owners and 40 were rescued for rehoming.

The 15 who were not suitable for rehoming were enthanased, according to Danny Holmes, the vet for the charity Animal Heaven Animal Rescue, which helped to rescue the animals.

The horses are currently in the charity’s rescue centre in Co Kerry.

Mr Holmes said many of the problems have arisen because the Department of Agriculture brought in regulations last year that owners must register their equine premises.