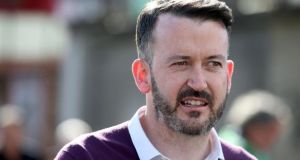 Donal Óg Cusack had applied to build a four-bedroom house and has appealed the decision to An Bord Pleanála. Photograph: James Crombie/Inpho

National and local hurling hero Donal Óg Cusack has abandoned his current plans to build his dream home out on the outskirts of his home-place in Cork.

Mr Cusack has told to An Bord Pleanála he wishes to withdraw his appeal against the decision of Cork County Council to refuse him planning permission for build a four bedroomed home, around 1km to the north of the east Cork town of Cloyne.

Former Cork keeper, Cusack is currently living at Ballinacurra near Midleton and was seeking to return to his home-place by building the new home there on grounds where there is an existing cottage.

A current coach with Clare’s senior hurlers, the triple All-Ireland winner was raised on Chapel Street in Cloyne.

However, following the refusal, Cusack is one of the highest profile casualty of a ‘locals only’ policy followed by local authorities across the country that seeks to concentrate populations in urban areas and limit one-off housing in the countryside.

Cork County Council refused Cusack planning permission after ruling that Cusack has no ties to the ‘local rural area’ at Knocknamadderee, Cloyne and that his main connection is to the Cloyne urban area.

There would be no such restrictions if Cusack was to seek planning now in the Cloyne urban area.

The Council stated that the area in which Cusack has applied to build is outside the Cloyne settlement boundary and as a result is designated a ‘rural area under strong urban influence’ where the development of new homes by ‘outsiders’ is restricted.

In such areas, restrictions don’t apply to persons who have lived in the area for over seven years or for example farmers’ sons and daughters looking to build on family-owned land.