Device detonated under prison officer’s vehicle in loyalist area of east Belfast at 7.10am 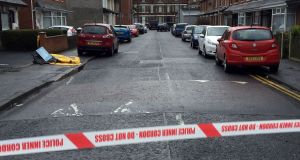 The van (centre, top) under which a device exploded in east Belfast, leaving a man injured. Photograph: Lesley-Anne McKeown/PA Wire. 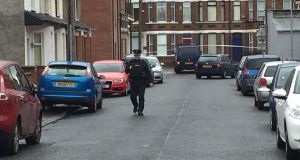 A police officer at the scene where a van (centre, top) under which a device exploded in east Belfast, leaving a man injured. Photograph: Lesley-Anne McKeown/PA Wire.

One of Northern Ireland’s most senior police officers has warned that dissident republicans want to mark the centenary of the Easter Rising by “killing police officers, prison officers or soldiers”.

PSNI Assistant Chief Constable Stephen Martin said the small numbers involved in terrorist activity were “out of step with the will of the people on both parts of this island”. His comments follow a bomb attack on a prison officer in Belfast at 7.10am yesterday.

The 52-year-old man has undergone surgery for injuries he sustained when a device partially detonated under the van he was driving over a speed ramp on Hillsborough Drive in the Woodstock area of east Belfast. The married father has 28 years’ service and was on his way to work. It is understood he works in the Hydebank Wood Young Offenders’ Centre in Belfast.

Mr Martin appealed to the public for help in bringing the “multiple people involved in this terrorist activity” to justice. “Tell us what you know.”

Mr Martin said his officers were committed to policing Easter 2016 events in a culturally sensitive manner as the PSNI recognises the Rising is a significant event.

“There are dozens and dozens of events being organised across Northern Ireland and we are working with the event organisers to make sure they pass off peacefully, they pass off in a respectful and dignified way,” he added. He appealed to the public for help in keeping people safe in the lead-up to Easter and said deaths were not inevitable if “everyone works together”.

Yesterday’s attack on the prison officer took place in a unionist/loyalist district, raising questions about dissident republicans’ capability to operate in these types of areas.

The attempt to kill a prison officer was condemned by politicians from all parties at Stormont and by the British and Irish governments.

Minister for Foreign Affairs Charlie Flanagan expressed his deep concern over the “callous and cowardly incident”.

“It represented a futile attack on the entire community which is determined to achieve a peaceful and reconciled society,” he added.

Northern Secretary Theresa Villiers said “this officer serves the whole of the community, in stark contrast to the people who carried out this appalling and violent crime”.

Stormont’s Deputy First Minister, Martin McGuinness, described the attack as “futile and despicable”. He said: “The overwhelming majority of our society supports the peace process and wants to see progress continuing to be made.”