‘Disappointing’ that Cork’s Páirc Uí Chaoimh not ready for finals

An animation showing the new facilities that will be available at the revamped Cork venue. Video: Páirc Uí Chaoimh 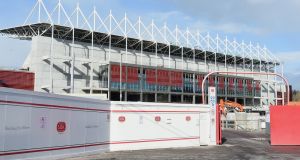 View of the rear of the main stand from Monahan Road, Ballintemple. Photograph: Larry Cummins

Mayor of Cork City Cllr Des Cahill has described as “disappointing” the news that Páirc Uí Chaoimh will not host either Munster senior championship final this year, as originally planned.

The Cork County Board say they were informed that the scheduled handover date of June 18th would not be met as the stadium is not ready to host the games.

Cllr Cahill said the news was a blow to area pubs and businesses. But he stressed that it was “one last hurdle” prior to the opening of the new multimillion euro stadium.

“It is hugely disappointing. I live within 300 yards of Páirc Uí Chaoimh and I would be very aware of the impact on pubs and shops in Ballintemple. We had been led to believe it was all systems go and with the rebirth of the Cork (football) team excitement was building.

But there is no point in it opening if it isn’t 100 per cent right. I guess this is minor in the grand scheme of getting it built in the first place. It’s going to be great. The conduct when they were building the stadium was second to none.”

Michael O’Donovan, chairman of the Cork city and county branch of the Vintners Federation of Ireland, said that the postponed opening of Páirc Uí Chaoimh was a “major blow” for area pubs and businesses.

“We were all looking forward to potentially two great weekends with the hurling and football finals. It is devastating for the Cork economy. It was two weekends that were pencilled in as being busy for pubs, restaurants, takeaways and taxi drivers. It would have rivalled the Jazz weekend for busyness.”

Hazel Hutchinson, licencee of the Sextant Bar, said she was expecting the Munster championships to draw “huge crowds” into her pub.

“Everyone would have been passing the door. There would have been atmosphere and flags; we were relying on it really. It was going to be very big. It’s so hard to get people out and in to the pub so this is a loss.”

Meanwhile, Aaron Mansworth, chairman of the Cork branch of the Irish Hotels Federation, said that they would not have expected massive bookings for the two final weekends given that for most fans a Munster final involves travelling to the match and going home on the same day.

However, he said they are eagerly anticipating the boost the stadium is going to give to Cork in the coming years.

“When it comes it will be massive. It is a good news story for us. You are going to have matches on down there, conferences and banqueting facilities. It is better that they open when they are ready.”

Once the revamp is complete Páirc Uí Chaoimh’s capacity will be 45,000, up from 43,500. The original covered 9,000-seater South Stand is being replaced by a three-tier stand holding 13,000, including premium ticket-holders.

The stand will house a 400-seat convention centre, kitchens, dining areas and shops. There will be 13 bars, seven hot food kiosks and 12 confectionery shops distributed throughout the stadium.

The 9,000-seat uncovered North Stand is also being redeveloped. Its capacity will fall to 8,000 and it will be covered. The City and Blackrock End terraces will be upgraded and will continue to hold 12,000 fans each.