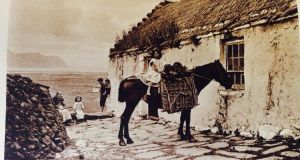 A photograph in a 1915 issue of National Geographic magazine of the abandoned village on Achill Island, Co Mayo. It is believed to be the only known picture of inhabitants at the village. Photograph: Seán Molloy/What’s On In Achill 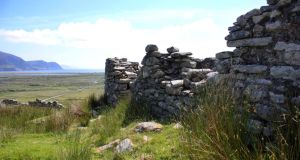 The house today in the deserted village on Achill, Co Mayo. Photograph: Sean Molloy/What’s on in Achill

A picture paints a thousand words but some raise more questions than they answer.

This photograph – depicting a family outside a house on Achill Island, Co Mayo (and located incorrectly in the caption as on the east coast of Ireland), may be the only photo taken of the village while it was inhabited.

“I was searching for images of Achill, and I got directed to eBay, where someone was selling a page from a National Geographic magazine from 1915,” said Paddy Gallagher, an Achill Island native. “So I ordered the entire magazine, and decided that . . . I was going to find out exactly where the original photos featured . . . were taken.

“I thought I was going to knock on somebody’s door and say, ‘here’s a picture of your ancestors from 1915’, but as I went up the hill I realised I was in the Deserted Village.”

Deserted for the last 70 years, the village dates to about 1750, says Dr Theresa McDonald, founder of the Achill Archaeological Field School. “The first emigration of villagers occurred in 1848 during the Famine, and inhabitants of the two remaining sections departed to nearby areas . . . between 1850 and 1852,” she adds.

But some stayed on, according to this photograph. Mr Gallagher got in touch with Seán Molloy, of the What’s On in Achill Facebook page, to confirm the location. “Given the angle of the Minaun Cliffs and Clare Island in the background, we’re pretty sure we’ve found the exact house,” said Mr Molloy. “It would’ve been families of maybe six to eight children living in houses of just one or two rooms.”