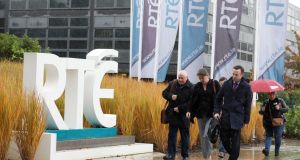 Séamus Dooley, Irish Secretary of the National Union of Journalists with chairwoman of the trade union group at RTÉ, Shirley Bradshaw, Fran McNulty, RTÉ Agriculture Correspondent and Karan O’Loughlin, arts, culture, print & media sector of Siptu on their way onto a meeting at RTÉ in Donnybrook this week. Photograph: Leah Farrell/RollingNews.ie

“It’s just coming up to a quarter to three on November the fourth, 2009 [sic],” Joe Duffy said hesitantly, “and it is with great sadness for this station, for this organisation, for this nation, but above all for his loving family . . . that I have to announce the passing of Gay Byrne, broadcasting colossus. He died at the family home surrounded by his loving family, tranquil, peaceful, earlier today.”

The news, when it came, was not unexpected. He had been ill for a long time, and in recent weeks it became apparent that his long and well-lived life was coming to a close. The tributes from his friends and colleagues at RTÉ were heartfelt, yet well-prepared. Byrne would have approved.

Many of the many tributes to the broadcasting colossus had more than a touch of the Remembrance of Things Past about them. They mourned not just the man, but the era he dominated – an era in which RTÉ was utterly central to the public life of the country, in which its chief presenter could fairly claim to the voice of the nation. But that time is gone, for the country and for RTÉ. And in the station to which Byrne dedicated his life, there is deep uncertainty about the future and about its role in the country it serves.

RTÉ’s worries about itself are not just financial, but they are immediately financial. Having run successive deficits, the station is broke and it needs urgent, painful, remedial action. Put bluntly, it must either bring in more money, or it needs to stop spending money at the current rate. One is unlikely, the other extremely difficult. The station’s leadership has been preparing a rescue plan, the subject of much recent behind-the-scenes wrangling. Publication was shelved because of Byrne’s death but predictably and inevitably, it spilled into the public domain. A sad week for everyone in RTÉ suddenly became a difficult and fraught one. And for the station’s management and board, it became a complete nightmare.

On Wednesday evening, The Irish Times contacted RTÉ to notify them we would be publishing a story detailing their planned extensive cost-saving measures and requesting a comment.

There was immediate panic among the RTE management who had planned on spending the next six days until the scheduled staff briefing preparing and tailoring their message. There were frantic phone calls between the director general Dee Forbes and other executives who run the organisation on a day-to-day basis.

At first, like all organisations in a similar situation, they focused on how the information got out. Accusations and suspicions flew between the executives and the RTÉ board, which is legally responsible for the broadcaster and which has not always seen eye-to-eye with all of the management team. But soon it became clear Forbes and her team had to concentrate on dealing with the crisis in front of them, rather than wondering who was responsible, or if it could be averted. Eventually, a statement was drafted to be sent out to all staff. The board, which is advised by its own public affairs consultants, prepared its own statement. The Irish Times published the story online at 9.45pm.

About 200 staff jobs would be cut next year. Top management and presenters would take pay cuts. Lyric FM would be downsized and moved out of Limerick, and its headquarters closed. A range of other tough and controversial measures would also be required in order to make savings of €60 million over three years, the report said.

Forbes worked into the early hours of the morning with some of her team preparing how best to deliver the latest instalment of bad news. Some staff woke up to the e-mail the following morning; others, having seen it the night before, had trouble sleeping after it. Don’t check emails from your boss late at night, advised Philip Boucher-Hayes.

The following day, there was a tense, fearful, sometimes angry meeting of staff in the old Late Late Show studio. The stage that Gay Byrne commanded for 37 years was now the pulpit from which the project to reduce costs would be explained to staff. The news was grim, and sourly received.

Many senior figures in RTÉ had long expected that there would be some form of last ditch intervention from the Government. The realisation that intervention wasn’t going to happen only materialised in recent weeks at Montrose and a rush to draw up cost-cutting measures began. That’s one reason why many of the proposals lacked clear detail.

But the truth is that Government does not believe that RTÉ is as important as RTÉ might hope. Ministers remained entirely unmoved by the wailing and gnashing of teeth of Montrose in recent days. Interviewed by RTÉ presenters and asked why they were not arranging for more money for the station, Ministers told them: get your own house in order before you come looking to us.

Privately, many politicians and officials are bordering on hostile; they are certainly not scrambling to help and discern no public mood to do so. Senior figures in RTÉ seized on comments by the Taoiseach Leo Varadkar on Thursday which seemed to suggest a willingness to help. But Varadkar also said that RTÉ had to get its costs down, and was clear that there wouldn’t be any extra money next year.

Several sources in Government were blunt when quizzed on Thursday: RTÉ has no advocates in Government; a bailout is not coming; let the station bring down its costs and then the Government will talk. For the foreseeable future, RTÉ is on its own.

It will be a difficult year ahead for the broadcaster. Even some of those familiar with the restructuring and cost-cutting plan do not nurture great hopes for its success. Confidence in the station’s management among staff is not high. There have been tensions between the board and the executives. An air of pessimism and uncertainty hangs over Montrose like a pall.

And yet the outpouring of public affection for Gay Byrne this week shows that there is public support for an idea of public service broadcasting that serves the public, that treats them with respect, that addresses them as adults. That is serious, but not solemn; entertaining, but not trivial.

Byrne himself never had much time for RTÉ management, and he frequently fought with them. He didn’t really think they were his boss. He thought the viewers and the listeners were. As RTÉ faces into the grind ahead, it is a maxim worth remembering.