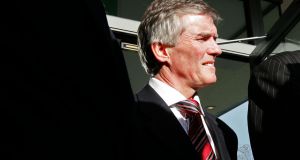 A trial date has been set for former junior minister Ivor Callely in relation to allegations of making bogus mobile phone expense claims.

Mr Callely (55) of St Lawrence’s Road, Clontarf faces six counts from the District Court in relation to using six invoices, from three phone companies, as false instruments at Leinster House for receipt of expenses for handsets and equipment, under the Oireachtas members’ direct purchase mobile phone scheme in November 2007, February 2008 and from September to December 2009.

Mr Callely, who remained at the back of the court during the short hearing, is also bailed to appear for a pre-trial hearing on February 14th, next.

Maurice Coffey BL, prosecuting (with Dominic McGinn SC) indicated that , as far as the State was concerned, there were “not many outstanding issues”.

The trial is expected to last approximately two weeks.