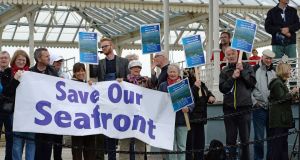 The scene at Dún Laoghaire Harbour on Saturday when 50 boats and about 200 people along the East Pier turned up to protest against the harbour company’s plans to construct a 390m cruise ship dock inside the harbour. Photograph: Frank Miller/The Irish Times

Dún Laoghaire Harbour Company’s plans to create a 390m cruise berth and ancillary dredging are an “unquantified financial gamble”, a Bord Pleanála hearing into the plans has been told.

People Before Profit TD Richard Boyd Barrett said the harbour company proposals – to dredge a 1.5km harbour approach channel, a 500m turning circle to the north of the harbour mouth and an in-harbour access channel of 850m to the proposed berth – were costed at €18 million.

But he said that figure was less than the 1996 cost of building the smaller berth for the Stena HSS which is to be demolished as part of the scheme.

Giving evidence on the opening day of the hearing, Mr Boyd Barrett said there was no berth or dredging project “in the world” of such a scale that could be completed for €18 million, and to embark on the project would be to expose the taxpayer to an “an unquantified financial gamble”.

He said the application was “inextricably linked” to proposals in the Dún Laoghaire harbour master plan for the urban regeneration of St Michael’s pier, the location of the proposed berth, to include a hotel and private apartments.

He produced a document from Dún Laoghaire-Rathdown County Council in which the council noted the harbour company’s contention that the “urban regeneration” of St Michael’s pier would be “essential to the economic viability of the harbour company”.

The importance of the document was that it showed the “privatisation” of harbour space was central to the harbour company’s vision for managing the resource, Mr Boyd Barrett said.

He also referred to proposals in the harbour company’s master plan to develop a “marina village” on land at the “gut” area near the west pier.

Independent local councillor Victor Boyhan also spoke against the plans. He said the harbour company had claimed the proposals were being put forward by the cruise stakeholder group, which included representation from Dún Laoghaire Harbour Company, Dún Laoghaire Business Improvement District and the council. He said this raised issues about the council’s independence. He noted the application was in the harbour company’s name only.

The council’s position on the cruise facility is due to be debated by the council at its adjourned monthly meeting on Thursday night.