Engineer calls ships plan hopes to attract ‘mountains on a hull, with a power plant inside’ 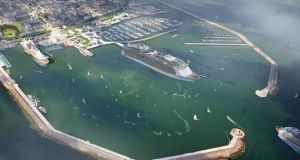 The term “cruise ship” in the context of the planning application for a 400m berth in Dún Laoghaire Harbour is a misnomer, An Bord Pleanála has been told.

He told the planning inquiry such cruise ships were typically 11-plus storeys and being built larger all the time. Such cruisers were not to be confused with ocean liners, as they do not cross the Atlantic, he said. Such cruisers were more properly described as “a mountain on a hull, with a power plant inside” .

Mr Shanahan told the inquiry the Queen Mary which moored off Dún Laoghaire earlier this year contained a 67MEW diesel power plant supplemented by two General Electric power plants producing 25MEW each. He said a total of 117MEW power plant was 26 per cent more than the harbour company had modelled for the purpose of the planning application.

Mr Shanahan said the importance of the power plant was that it would produce sulphur oxides (SOx) and nitrogen oxides (NOx), which he said would belch down on those walking the pier in Dún Laoghaire. Such ships would be in the harbour with engines running all day, and it was envisaged there would be one ship every second day in summer, at least.

He questioned whether the modelling carried out had considered the “inversion effects” which are that in certain weather conditions smog remains low over a community, being unable to rise over nearby hills.

Mr Shanahan asked who would be responsible for monitoring the pollution levels coming from the ships’ smoke stacks.

However, Edward Porter for the harbour company said in fact the Queen Mary was unusual among such ships as it had been built capable of crossing the Atlantic.

He said the International Maritime Organisation and legislation from the EU had imposed a series of specific limits on both marine fuels and engines .

He said analysis in his presentation had indicated emissions would be within permitted levels and he told the inquiry this was a matter for the Department of Transport to police.