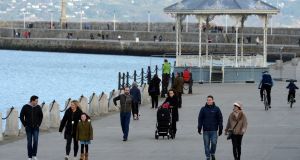 Save our Seafront claims November’s decision by An Bord Pleanála restricted the size of ships but left open the possibility of Dún Laoghaire harbour being usurped by cruise liners. Photograph: Eric Luke

A judicial review of An Bord Pleanála’s decision to approve cruise ship facilities in Dún Laoghaire harbour will be sought in the High Court on Thursday.

The campaign group Save our Seafront, which is taking the challenge, says last November’s decision by Bord Pleanála restricted the size of ships but still left open the possibility of the harbour being usurped by cruise liners.

The board granted permission to Dún Laoghaire Harbour Company for an €18 million development to build a new pier and dredge a navigation channel through the harbour mouth, as well as developing a turning circle outside the harbour. But the board ruled the size of ships permitted to enter the harbour should be restricted to 250m in length, rather than the 340m limit sought by the company.

The chairman of Save Our Seafront, local TD Richard Boyd Barrett of the Anti-Austerity Alliance-People Before Profit, said the development approved by the board could still result in a significant loss of amenity to existing harbour users. He said the board’s decision did not properly take into account the environmental implications of dredging and other aspects of the plan.

Save our Seafront is to ask the court to grant a judicial review of the decision on the basis of two points.

It will also claim Bord Pleanála has no jurisdiction to grant consent in respect of a development for which an EIS has not been submitted. A number of other grounds are also expected to be raised.

Mr Boyd Barrett said:“A giant cruise berth in Dún Laoghaire harbour would negatively impact on all users of the harbour – walkers, boat-users and the varied wildlife. Our harbour is a wonderfully historic and cultural asset and should be developed to enhance all aspects of our harbour rather than limiting it to giant cruise ships.

“We are applying for a judicial review in order to protect Dún Laoghaire harbour for the people and the natural environment.”